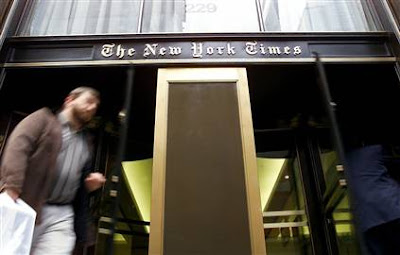 Nice of Dan Kennedy at the Guardian in London to pick up on ethical questions I raised recently surrounding the New York Times hiring Bill Kristol and his political donations, and for placing those questions in larger context.

Left-leaning bloggers are in an uproar over the neoconservative William Kristol's landing a plum spot on the New York Times op-ed page. It's not hard to understand why. What concerns me, though, is not so much Kristol's ideology as it is that the Times has compromised its own ethics. [...]

Kristol will write his New York Times column for just a year, producing a weekly commentary that will debut on January 7. [...] But Kristol has never shown much, if any, regard for the ethical conventions of journalism, as he has remained directly involved in Republican politics.

For instance, the indefatigable blogger Michael Petrelis reports that Kristol has been a frequent financial contributor over the years to the likes of former senators George "Macaca" Allen and Spencer Abraham. I cross-checked Petrelis' digging at OpenSecrets.org and found the same contributions, as well as a slew of others made by Kristol's wife, Susan Kristol. Such donations are a serious ethical breach for any journalist. Perhaps the New York Times will make him stop, but he should have stopped on his own in the mid-1990s, when he embarked on his journalistic career. [...]

The New York Times' 54-page code of ethics forbids even clerks and secretaries from engaging in "any ... form of political partisanship while on the job." In more than a decade as a journalist, Kristol has never shown any such compunction. Can he change during his year at the New York Times? For that matter, does anyone even expect him to? We'll see.

Sure, it's great of a major publication in the United Kingdom write about Kristol's political donations and how the New York Times should address the contributions against its ethical journalism rules, but where are the columns or blog entries of professional American media watchdogs about his donations?

And the Times should quickly tell readers if Kristol will adhere to the paper's ban on political donations during his one-year gig. In my view, this is a simple matter that the public editor ought to address, along with the myriad other ethical questions raised related to the paper hiring Kristol.