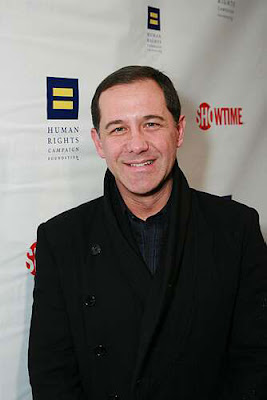 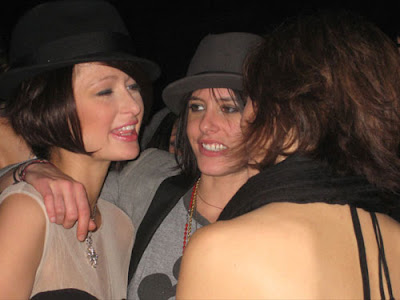 (Who else was at the party with Solmonese? None other than clueless Paris Hilton! Both photos taken by Alex Berliner.)
Millions of gay people in the USA and around the globe have their hopes for a more tolerant political discourse pinned to what happens in New Hampshire's crucial primary tomorrow.
I dare say that a good number of us wish we could be there in the important days leading up to the balloting, to do our part to engage America, the body politic and the worldwide media covering the hoopla about gay matters.
The end of the hateful, and criminally deceitful in too many ways to count, Bush and Cheney administration is coming to an end, a new hopeful day is beginning for our fabulous democracy, and the gay family is part of the core constituency demanding change.
Where, oh, where in the world could the fearless leader of the country's premier gay political pressure group, Joe Solmonese of the Human Rights Campaign, be at this historic political moment?
We know that on Saturday he was in San Francisco meeting dozens of angry tranny leaders for a private discussion about ENDA and gender identity issues, but where was Solmonese?
You know, the man the media and lots of gay folks think of as not just the boss of HRC but by extension the number one gay leader and spokesman for all LGBT people, he was on the ground in New Hampshire doing his vital part to fighting for our visibility and equality on Sunday, right?
Nah, Solmonese was still in California. He was down in Hollywood walking the red carpet and hanging out at the shindig for the season premier of the dramatic cable lesbian series "The L Word." I am disgusted with Solmonese and the HRC.
Is a party for a television show really all that more important a political concern at this time for the head of a $25 million advocacy group, over the first in the nation primary? The answer is in the photos above.
Solmonese's glaring absence from New Hampshire demonstrates clear disengagement by him and the board of HRC, and should not go unreported in gay press coverage of the primary.
In less than ten days into the new year, Solmonese and HRC have not impressed with their plans and actual (non)-advocacy on the campaign trail, and the gay community would be wise to ask them to present details _now_ about their strategy for the rest of the campaign year.
We cannot allow this important political year and its vast opportunities to advance a gay equality agenda to be squandered by HRC's nincompoop executive director.
Compare his non-involvement New Hampshire with that of former HRC leader Elizabeth Birch. At least she's been in the state and campaigning in the bad weather for HRC's favorite candidate, Sen. Hillary Clinton:

For two days, I have been tromping through the New Hampshire snow for Hillary Clinton. Door to door, even farm to farm, the goal is to get people in their homes to engage in a discussion. The entire team for the Franklin and the South Lakes Region is lesbian and gay. We have swept the area and the local organizers are very impressed. [...]
My experiences have varied, but none compared to one encounter yesterday. A couple of us were precinct-walking in a trailer park in Franklin, New Hampshire. The tired, circa 1970 mobile homes looked as though they had been tossed there at some point, and were laying fallow. But inside was life—real families, real problems.

I came upon one mobile home with a sign outside that read: "Fuck With Me, And You Fuck With the Whole Trailer Park." Based on my low brow upbringing and feeling that the Democratic party should go anywhere to take back our country, I plowed ahead up the three metal steps to the door. [...]
As we left he said, "You know, you are the only people from any of the campaigns to ever visit my home. That gets in your head. You think about it. That will stay with me. Who knows who I'll vote for..."

One more for Hillary. Maybe.

Posted by Unknown at 10:30 PM
Email ThisBlogThis!Share to TwitterShare to FacebookShare to Pinterest