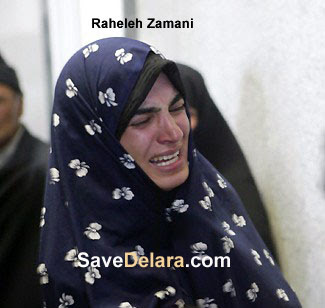 Iran Hangs Raheleh Zamani,
27-Year-Old Mother of Two
There is tragic news today from Persian-American human rights advocate Lily Mazahery about Iran executing Raheleh Zamani this morning in Tehran. As a gay man very opposed to the death penalty in all cases and by all governments, I feel it's important to call attention to the latest executions in Iran, when Iranian are hanged or stoned to death, regardless of their sexual orientation.
I hope 2008 is a year in which effective international campaigns are mounted to end state-sanctioned killings in Iran, and in my country, the United States of America.
Here are the two messages from Lily about Raheleh Zamani case and death.
First message:

According to reliable sources, Raheleh Zamani was transferred to solitary confinement today in Tehran's Evin prison, and she is to be executed by hanging at dawn on Wednesday, January 2, 2008.

Raheleh, who is in prison for killing her husband, was originally scheduled to be executed on December 19, 2007. However, human rights lawyers and activists in Iran and abroad joined forces, once again, and caused Iran's head of judiciary, Ayatollah Shahroudi, to grant a temporary stay of execution only hours before the execution was to be carried out.

The order was designed to provide additional time for Raheleh to obtain the pardon of her in-laws, which is legally required to save her life.

What You Can Do:

It is with profound sadness that we report the following: Raheleh Zamani was executed today at dawn, Tehran time. She was hanged in Tehran's notorious Evin prison along with 11 others as snow fell silently all around ... frozen tears of crystalized anguish for the senseless murder of a 27 year old mother of two young children.

Raheleh, a woman suffering from battered wife syndrome, betrayed by her husband and her family, and, ultimately, by a legal system that should have attended to her medical needs instead of resorting to a brutal execution, is now at rest.

Raheleh, who came from a simple and uneducated family from a small village in Iran, was married off when she was only 15 years old. She endured years of abuse at the hands of her husband, and at the end, her in-laws watched the grim proceedings as she was hanged along with eleven others.

There are no words to adequately describe the grief we all feel.

Our sincere and heartfelt thanks goes to each person who reached out to help Raheleh with letters and petitions.

May this be a reminder that these cases are indeed in need of our intervention. Hopefully, we can gather more support for those whose cases are still classified as urgent to avert a repetition of this horrific and tragic ending to a precious life.

May she now rest in eternal peace.

Posted by Unknown at 12:23 PM
Email ThisBlogThis!Share to TwitterShare to FacebookShare to Pinterest

Thank you for letting us know about this horrendous miscarriage of justice. Not a word in the mainstream media, or from NOW. This is Sharia law in action.

One such woman faces a fate like Raheleh's. Delara Darabi faces execution by hanging for a crime she didn't commit. Having now spent several years in prison, she suffers from severe depression and has tried to take her own life. Her case has reached its final stage as it is now in the hands of Iran's Chief Judge, Ayatollah Shahroudi. If he does not grant Delara a stay of execution, this girl will die. It is critical that we, as an international community observant to even the most basic human rights, pressure Ayatollah Shahroudi to ultimately let this innocent girl go.
Please visit savedelara.com for information on how you can help save this girl's life.