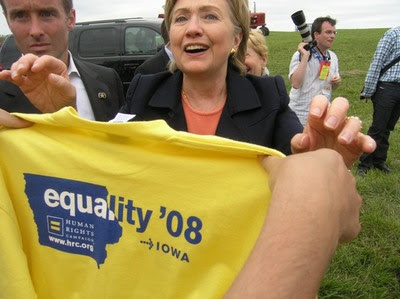 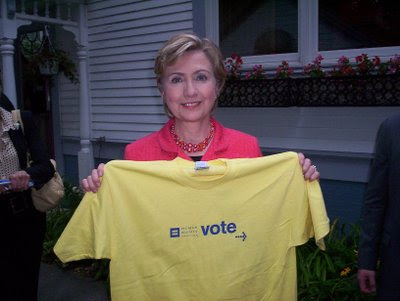 (Hillary Rodham Clinton, in Iowa and NH, accepting HRC tee shirts.)
I'm not quite sure what to make of HRC's Joe Solmonese and his opinion column in today's Washington Blade. It's all about his group delivering supposed results for the gay community in Iowa and New Hampshire.
Solmonese would like readers to believe he and his group have knocked themselves out like never before to put our issues before the voters, candidates and worldwide press in these crucial early primary state.
I love how he writes that HRC has been preparing for this important election time, but he omits the fact that, despite the proclaimed importance of New Hampshire, he thought he should skip all the action up there and instead headed to Hollywood to work the red carpet at the "L Word" season premier party.
Solmonese also pretends HRC hasn't endorsed any candidate yet, but all intelligent gay politicos know he and his organization are squarely favoring Sen. Clinton for president. Someone should tell Joe to check the FEC files for HRC's real (behind the scenes) leader, Hilary Rosen. She's given the maximum allowed by law to her friend Hillary Clinton, all but assuring the HRC will come out for her, if she's the Democratic nominee.
Finally, Solmonese ends his column grandly announcing the gay community has already achieved "success" on the 2008 campaign trail. Um, could he provide us with hard facts to back up this claim?
While I'm sick and tired of politicians spinning and dodging to obscure there lack of accomplishments, I'm even more sick and tired of Solmonese and the HRC public relations departments doing the same.
From today's Blade:

THE WHOLE WORLD — or at least the political world — has been focused on two states for the past few weeks: Iowa and New Hampshire. Every four years, these states find themselves at the epicenter of our democratic process. At the Human Rights Campaign, we knew this day was going to come and we’ve been preparing for it.
Why is it important for the GLBT community, and more specifically the Human Rights Campaign, to be playing such an active role in these states — especially when we haven’t endorsed any of the presidential contenders? [...]
Our community has already had success in 2008. But this is only the beginning. As our nation continues to hold elections to determine who the party’s nominees will be, HRC will continue making sure our community, and our issues, are actively discussed and debated.

Posted by Unknown at 8:50 AM
Email ThisBlogThis!Share to TwitterShare to FacebookShare to Pinterest

The problem with the Act Up crowd is that they are always blaming others, instead of criticizing gay culture for being sexually irresponsible. That's been our biggest problem for 18 years. But here you go again, rehashing the minute inconsistancies of others. Of course HRC and Hillary are going to dodge and weave. That's how she gets elected. Get used to it. http://a-civilife.blogspot.com