It's certainly laudable that San Francisco's public defender since 2002, Jeff Adachi, has stood up to the police department when necessary and also provided ordinary citizens with generally excellent legal defense resources.

However, I'm quite disappointed he this week garnered tremendous mainstream press and social media attention after an assistant public defender, who was arrested inside a courthouse hallway protecting her client's rights, lodged a complaint and Adachi and his office didn't mention the terrible absence of transparency with our police oversight agency.

Here's the letter I sent to Adachi yesterday:

"As someone who has filed numerous complaints with the Office of Citizens Complaints, I am very familiar with how their process is opaque and lacks transparency. Names of officers facing complaints and findings of investigations are private, with no details released to the public.

"Since the arrest of your deputy public defender Jami Tillotson, I have hoped your office would file a complaint withe OCC and also shed light on the need to bring genuine transparency to their process, investigations and what is made public after complaints are lodged and adjudicated.

"I have not seen statements from you about these transparency concerns and they were omitted from this release. It pleases me to see that Tillotson has posted her complaint online for all to read.

"Let me know if I've missed your statement about the OCC and transparency, or if you'll provide me with such a statement." 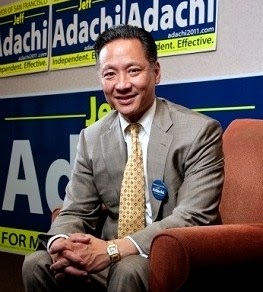 "There is no other statement we've issued. We'll see how transparent this investigation is."

My attempt at further communication with his office hasn't produced more info.

Adachi is nobody's fool and he certainly is aware of the opacity of the OCC, that hinders many folks from lodging complaints with the oversight agency.

He knows full well at the end of the OCC investigation, a vague statement omitting details and names will be issued with scant transparency. It's not just the lack of transparency at issue here and Adachi's "let's wait" statement, it's also the failure of the OCC to deliver accountability to the public.

The public defender should have used the Tillotson complaint to press for genuine public transparency at the OCC.
Posted by Unknown at 2:17 PM
Email ThisBlogThis!Share to TwitterShare to FacebookShare to Pinterest

Michael, are you as struck by the irony of this situation as I am? Here the police are contending they have every right to take photos of people in a public space, yet when YOU took a photo of a public official in a public space, they arrested you. Guess the real rule depends on whose goat is getting axed.