Hundreds of students at several San Francisco Archdiocese-run schools and their supporters in the gay community staged a vigil in the pouring rain on Friday, Feb. 6 outside St. Mary's Cathedral to protest church leader Salavatore Cordileone's new handbooks for Catholic teachers. The language of the handbooks stigmatizes homosexuals, birth control methods, new fertilization techniques and other modern human advances.

The National Catholic Reporter sent Dan Morris-Young to cover the protest and other aspects of the resultant controversy over Cordileone's latest efforts to take the church back a century or two. At the end of Morris-Young's article, he mentions the Saturday, Feb. 21 actions taking place outside St. Mary's and I'm quite pleased he reports we won't be staging our protest inside the cathedral.

Please join us and stand up to Cordileone and the Catholic Church's hateful policies and beliefs. Here's an except from the National Catholic Reporter article:


"SHCP [Sacred Heart Catholic Prep] junior Morgan Hood and St. Ignatius senior Jasmine Barnard summarized what many of the student protestors said.
"'We have a lot of faculty and students who are part of the LGBQT community, and we don't want them to feel they're not welcome and supported,' Hood said.
"Barnard agreed. 'A bunch of my friends are gay. I have an amazing teacher who changed my life, and she's gay.'
"Billy Bradford traveled from Castro Valley to join the protest. Holding a sign that says, 'Cordileone denies gay families,' he said, 'I'm a gay father with a kid in college. I'm unhappy about what the archbishop's saying about my moral failings and how my family is not a family. [...]
"San Francisco activist and blogger Michael Petrelis announced that a 'kiss-in' protest of what he called Cordileone's 'bigoted remarks and policies' would be held Feb. 21 outside the cathedral to coincide with the archdiocese's annual liturgy to honor married couples." 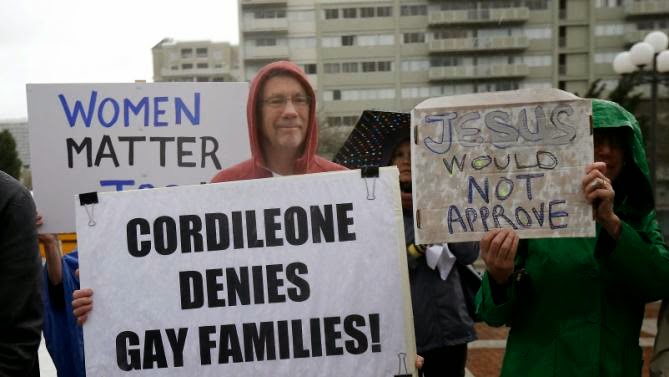