From Park Avenue to Castro Street to Rhode Island Avenue, scores of LGBT and AIDS activists took to the streets on January 31 to send messages to the elitist Human Rights Campaign. 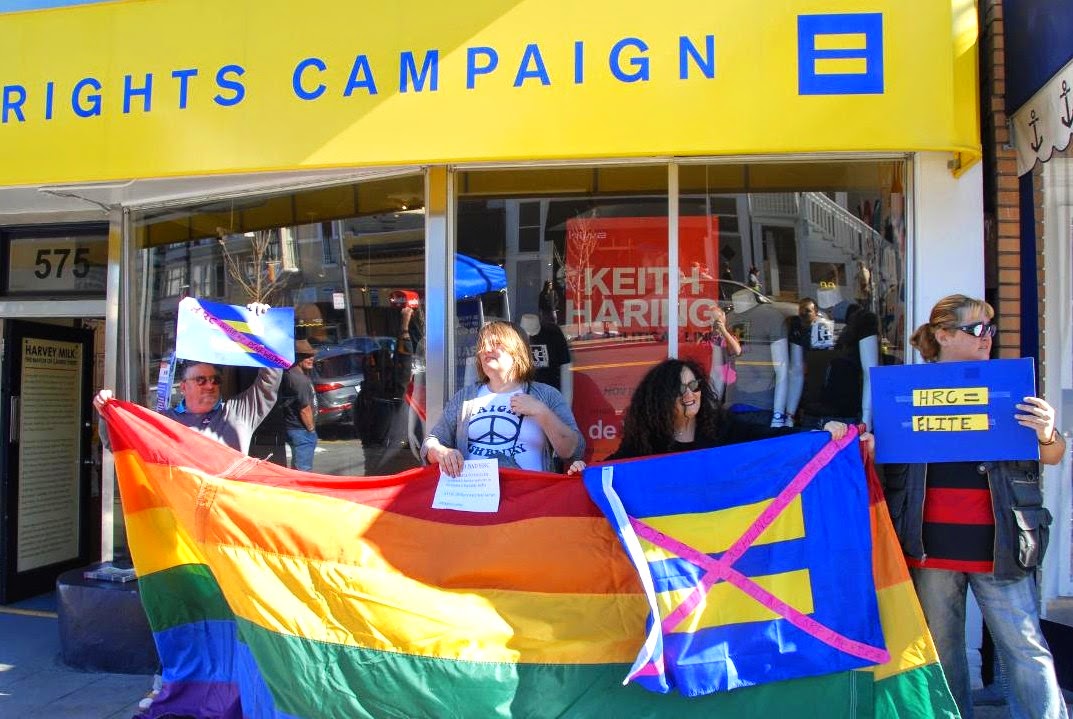 Here in San Francisco, on a gloriously warm and sunny day, about two dozen activists protested for an hour at HRC's souvenir shop on Castro Street.

Global gay advocate Melanie Nathan distributed flyers to passersby explaining our displeasure that the group is too cozy with corporations, ignores LGBT economic justice concerns, and is silent about lack of affordable housing.

The store manager, dressed entirely it seemed in an ensemble of only HRC-designed blue-and-gold clothes, he was quite irritated with our presence and wouldn't engage us in a conversation about our complaints. 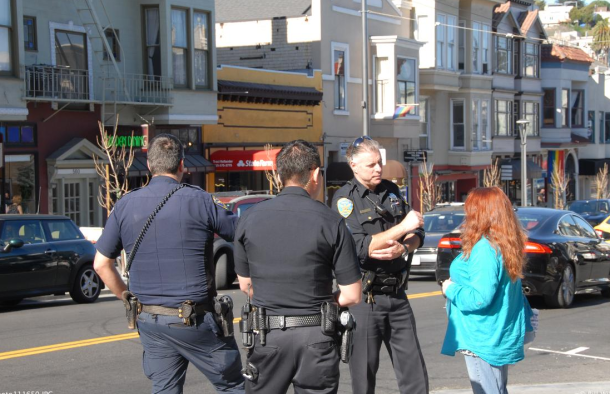 We were under the surveillance the entire time by four uniformed officers of the San Francisco police department. When we unfurled an enormous rainbow flag across the length of HRC's store for a few minutes, when no one was entering or leaving the store, the cops got bossy and told us to not block the customers.

Former HRC board member Supervisor Scott Wiener constantly complains the SFPD is allegedly woefully understaffed, but there are always plenty of on-duty officers ready to monitor handfuls of activists as we were reminded yesterday. 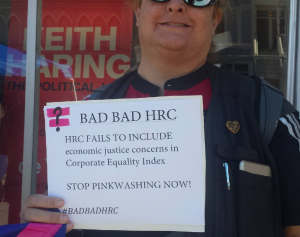 One transgender woman smiled for the cameras holding a #BadBadHRC sign that explained why HRC's ratings of businesses is problematic, to say the least.

A homeless transgender woman was among the participants and spoke about her needs for affordable housing in the Mission District, and decent paying job with benefits. She demanded that HRC start addressing the concerns of poor and low-income LGBT folks, especially in the Castro and Mission. She pointed out HRC has an "action center" in Harvey Milk's former camera shop, yet the group takes no action regarding the local economic justice crisis for queers in San Francisco.

We offered sliced bagels, organic apples and sticky pastries to everyone, adding a brunch aspect to our protest. It was also a fun way to engage with passersby, a good number of whom supported us.

About an hour after we wrapped up, activists in Washington, DC, redecorated the entrance of HRC's building on Rhode Island Avenue. They painted a pink slash through the gold bars of HRC's logo, symbolizing their demand for no "pink-washing" of corporations rated by HRC on a severely limited number of equality matters.

Activists also plastered large signs next to the defaced HRC logo listing numerous demands for change at HRC. Cold temps didn't keep them from participating in the national protests on a single day.

Soon after the DC action was concluded, a large number of activists gathered in front of Manhattan's swank Waldorf Hotel in bone-chilling weather. A report from Brandon Cuicchi:

"We had a turn out of approximately 50 people in below-freezing temps.  We kicked things off with a pizza party and rally across the street from the Waldorf.  ACT UP members talked about the invisibility of HIV in HRC's equality index, the homeless youth epidemic, the guidelines barring HIV+ people from organ transplants, and ACT UP's call for HRC's assistance in NY State's Plan to End the AIDS Epidemic. After the rally, protesters marched across the street and picketed the entrance of the Waldorf while surrounded by 20 members of the NYPD and Waldorf security." 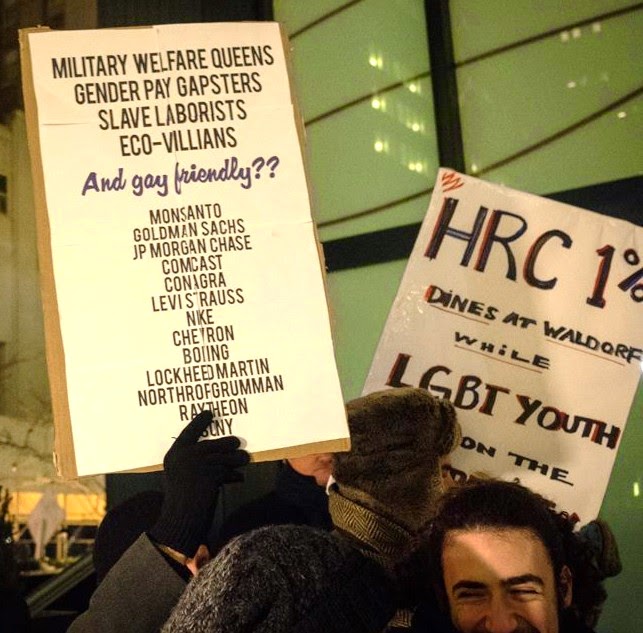 The New Yorkers displayed signs calling HRC to account for the friendly ratings given to military welfare queens, gender pay gapsters, slave laborists and eco-villains, and noting the LGBT 1% dines at the Waldorf Hotel while LGBT youth sleep on the streets.

Many thanks to all who assisted in making January 31 a day of national protest against HRC's elitist approach to LGBT advocacy and sucking up to corporate interests. Read more details and view additional photos at these links: