Kevin Jennings Literally
Back in the Saddle 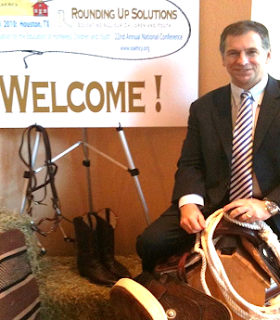 (The original caption for this photo read: "And the cowboy said 'Yippe Ki Yay.'" Anyone got a better caption? Credit: Education Department.)
The Office of Safe and Drug-Free Schools (OSDFS) within the Education Department distributes a weekly newsletter, updating officials and the public about new developments in numerous areas related to bullying, safety and funding matters.

This week's edition contained the usual note from the director of OSDGF, Kevin Jennings, with excerpts posted here:


Last week I had the opportunity to keynote the National Association for the Education of Homeless Children and Youth annual convention in Houston (see cool picture of me below —hook ‘em horns!). The record attendance of more than 900 was both exciting and depressing – exciting because so many were there for information about this disenfranchised population, and depressing because the need is so great. [...]

When the homeless liaisons funded by the federal McKinney-Vento law were surveyed in 2009-2010, they identified transportation as the #1 obstacle to insuring homeless children get an education. [...]

Kids need stability. Even if we cannot immediately give them a stable home, we can insure their schooling remains stable so that they can continue to learn. Let’s make sure that, whatever other chaos these children are facing, school remains a stable and safe haven for them.

This peek into Jennings' world, which I've recently involved attending lots of conferences around the country and addressing diverse audiences, while not on a topic directly related to a gay or bullying issue, piques my interest. I like seeing part of Jennings' agenda includes the needs of homeless kids, regardless of sexual orientations.

The regular newsletter from the OSDFS, with messages from Jennings, pulls back the department's heavy curtain that was draped over him when he became a rightwing target.We need more sunshine from all of the Obama gay appointees, not just Jennings.

And it's not just uplifting short notes and cutesy photos. We need Jennings and all gay liaisons or administrators at every agency issuing regular updates on how their work is affecting and improving gay lives. Tell us where the changes are occurring, or where more work needs to be done.

Then go a few steps further and let's have the appointees holding regular town halls, in line and of the spirit of such forums held by President Obama and Secretary of State Clinton. Set up conference calls with gay print press and bloggers, and not just the mainstreamers, but also invite small, critical bloggers like me.

Until then, ride 'em, cowboy!
Posted by Unknown at 9:38 PM
Email ThisBlogThis!Share to TwitterShare to FacebookShare to Pinterest