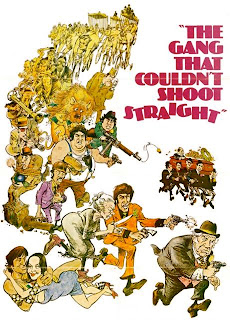 (Jimmy Breslin's 1969 novel, and the film it inspired, both of which gave me reasons to chuckle back in the day, have resonance today for Gay Inc.)
Memo to all gay peaceniks who are not losing sleep over either repealing Don't Ask, Don't Tell and providing more bodies to fight America's two illegal wars, or helping to pass the Pentagon's new budget request for ammo, warships and other cogs in the war machine: we have nothing to worry about regarding DADT coming to an end.

Thanks to several orgs and factors, we're dealing with the gang that couldn't shoot straight, starting with the Democrats who happen to be gay at the Human Rights Campaign. The HRC is either cursed or blessed, depending on your political beliefs, with the reverse Midas touch. Everything they legislatively and political touch turns to shit. HRC's pathetic attempt at repeal this year got off to a rocky start with a female comic needing some laughs for her reality TV show, and has gone downhill ever since.

The Astroturf group GetEQUAL has spent a great deal of its $800,000 budget fighting to supply the military with more recruits to join the illegal wars in Iraq and Afghanistan. They've staged many high-profile and expensive DADT actions, and like HRC, GE has no position on the wars themselves or progressive agenda items like cutting the Pentagon budget for humanatarian needs.

Let's not overlook the Servicemembers Legal Defense Network, or West Point's KnightsOut org, the Servicemembers United group, Dan Choi Inc, the Palm Center think-tank, Cathy Renna Inc and all the other gay entities, not to mention straight institutions like the Center for American Progress and its chief gay strategist Winnie Stachelberg. They all contribute the assault on the DADT policy.

Throw into the mix the wacky and closeted OutServe org, founded in the summer by an anonymous active gay member of the military, which I recently criticized on many fronts. This org, along with two others, signaled a retreat on the DADT amendment in the Pentagon budget act, according to the Washington Post:

On Monday, three groups that support lifting the gay ban -- the Palm Center at the University of California Santa Barbara, OutServe and Knights Out -- said they want lawmakers to pass the bill whether or not it includes language ending "don't ask, don't tell." [...]

It's a risky political calculation that puts them in direct conflict with four larger groups more directly involved with lobbying efforts to end the ban: the Human Rights Campaign, the Center for American Progress, Servicemembers United and Servicemembers Legal Defense Network.

Fred Sainz, a spokesman for the Human Rights Campaign, said the other groups are "Good people who are extremely naïve legislatively." [...]

Talk about (lack of) unit cohesion! Add to the lunacy and naivete quotes, one gay blogger labeled the move by the three renegade orgs as "incredibly idiotic."

If there's a coordinated plan of attack among all these repeal actors and parties, or agreed upon agenda, or positions on using the budget bill as the vehicle for DADT's demise, can someone share it with me, please.

By the way, there was so much confusion and criticism from other repealers over the OutServe/KnightsOut/Palm Center position that Cathy Renna worked with her clients these orgs to rebut the outcry. Click here to read the Renna release.

You don't need a crystal ball to know DADT will be retained. What needs repealing are HRC, Gay Inc closed-door strategizing, and bumbling Astrotuf groups.
Posted by Unknown at 4:23 PM
Email ThisBlogThis!Share to TwitterShare to FacebookShare to Pinterest