ACTing UP With Nora Ephron 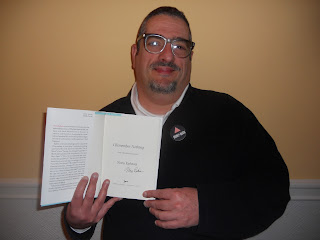 I have crossed one must-do item off my bucket list - meeting writer and filmmaker Nora Ephron.

This past Monday evening she sat down on the Herbst Theatre stage for an extended conversation with moderator Paul Lancour of KQED Radio and the audience, which included me. He was a wise conversationalist who knew to ask short, good questions then simply let Ephron tell witty anecdotes about her life and many parts of her long career.

Once Lancour announced they were opening the chat for questions from the audience, my left hand shot up and waved until one of the runners with a mic noticed I was ready to say a few things.

I used my mic time to tell Ephron I was someone who wanted to hear her speak in March 1987 at the NYC gay community center, but she cancelled due to illness, Larry Kramer replaced her as the speaker and that ACT UP eventually grew out his lecture. I believe I spelled out AIDS Coalition To Unleash Power, but know for sure I gave the old "ACT UP! Fight back! Fight AIDS!" call to action a shout out. Sounded good to me, and more than 20-years of AIDS activism, and too many dead comrades, flashed before me.

Then I went blank, pressured myself to think of a question, and asked if she had spoken with the ACT UP Oral History Project, in her capacity as an inadvertent player in the birth of the activist group. My adrenalin was rushing at maximum dosing as I sat down, and couldn't hear much of her response.

Thank goodness my companion for the evening, Jeffrey Taylor, had no problem listening to what she said. Jeffrey's observations:

Nora cheered you on, raising a fist (and lifting her legs!) said that she stood with you. The audience clapped after hearing the old political chant, with reactions ranging from polite to enthusiastic. Ephron was also very clear that she was not to take the credit for ACT UP's genesis, and that it was really Larry's instigation that started the whole thing.

"If it hadn't been on that day, it would have been on the next or the next," she said.

Then, she said she really wouldn't have much more to say than that to the ACT UP Oral History Project other than what she had just said onstage. She went on to say how she never understood why she wasn't asked to be part of the John F. Kennedy library's oral history project because she did some work in the Kennedy White House.

After the on-stage chat concluded, Ephron signed books in the Herbst Theatre lobby and I got on the line with Jeffrey, ready to snap a photo of me with her. I wore a white polo shirt under my black open-collar pullover, and had two DIY "Silence = Death" buttons on my chest. One was for Ephron.

But she had decreed, and the assistant publicists warned everyone on the line, that no photos were allowed. Oh. That was disappointing to hear, but regardless, when I got up to the table, I flubbed my introduction and said I was "Michael ACT UP" and couldn't share allow for just one photo with the "Silence = Death" I had just handed to her.

"Larry forwarded your email to me, saying you were coming tonight. I'm not bending the no photos rule," she said. "ACT UP was a good group." We shook hands, as I said it was great to finally hear her talk.

The photo of me above, in my outfit for Monday night, was taken today by my honey and partner Mike. I'm holding a copy of Ephron's new book, "I Remember Nothing," that she signed.

Now, on to the rest of my bucket list to-do actions.
Posted by Unknown at 5:31 PM
Email ThisBlogThis!Share to TwitterShare to FacebookShare to Pinterest