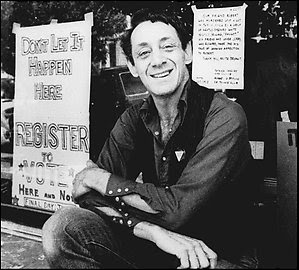 Sissies Won't Debate Prop 8 Opponents
With the making of the "Milk" movie this past year, and its world premier at the Castro theater earlier this week, the life and times of Harvey Milk, and his political successes, have been much discussed, especially as we geared up to fight still another proposition attempting to deny us equal rights, Prop 8.

I've chatted with some gay elders who were active at the time of the Briggs Initiative, that would have stripped gay teachers of employment protections across the state.

How could they have defeated that initiative, with little money, no cell phones, faxes, the web, computers, and all the electronic tools we now have, was what I wanted to learn.

Over all, their responses echoed two things: Gay visibility and Harvey traveling up and down the state to debate the initiative's author, John Briggs. I bet Harvey saw the debates as a chance to garner free media, and educate voters to the truth about gays.

Harvey's Wiki entry illustrates how he fought his electoral battle:

Briggs' messages supporting Proposition 6 were pervasive throughout California, and Harvey Milk attended every event Briggs hosted. Milk campaigned against the bill throughout the state as well, and swore that even if Briggs won California, he would not win San Francisco.

In their numerous debates, which toward the end had been honed to quick back-and-forth banter, Briggs maintained that homosexual teachers wanted to abuse and recruit children.

Milk responded with statistics compiled by law enforcement that provided evidence that pedophiles identified primarily as heterosexual, and dismissed Briggs' points with one-liner jokes: "If it were true that children mimicked their teachers, you'd sure have a helluva lot more nuns running around."

Those debates and their importance receive their rightful attention in Randy Shilts' book "The Mayor of Castro Street." Click here to read the pertinent section.

Fast-forward to this week, and the Yes on 8 people issuing a debate challenge to the chief executive of No on 8, Steve Smith.

Since this is the most closely watched election issue in the nation outside of the presidential contest, I am proposing that voters hear from both campaigns in a more substantive forum than is possible in the fit for tat exchange of television and radio commercials.

Accordingly, we are hereby challenging your campaign to a live 30-minutes televised debate in the presence of voters and the media to discuss this critical initiative, including whether failures of Proposition 8 will result in gay marriage being taught in California public schools.

We propose that this debate be conducted either this Saturday or Sunday evening, November 1 or 2, under the auspices of an independent organization such as the California Broadcasters Association.

I hadn't much thought about debates between the Yes and No forces, for the simple reason there haven't been any. Have I missed the leaders of both sides staging debates in Fresno, San Francisco, Long Beach, Orange County and Los Angeles? As far as I know, our side never issued a similar challenge to the Yes side, nor am I aware that either side tried to arrange debates through the League of Women Voters or newspapers and TV stations.

Where the eff were the televised debates on Prop 8 the past month? Was No on 8 director Steve Smith not interested? What about Mark Leno or Kate Kendall or Phill Wilson, gay leaders I'd like to see on TV debating our opponents.

But I digress. What was the response from Steve Smith, on behalf of the 8 forces and every gay person in CA?

Thank you for your letter. It would be a disservice to the people of California to debate an issue that is completely unrelated to Proposition 8 ...

The only debate worth having in California is why you have pursued such a deceptive campaign strategy.

That debate you can conduct alone - with your conscience.

Call me a traitor to the gay movement for challenging another decision by the No leadership on how to win this campaign, but I would like to disagree with Steve Smith. There are many debates worth having in this beautiful state, debates led by out of the closet gay and lesbian married couples.

What would Harvey say about Steve Smith and the No campaign, acting like big sissies afraid to debate our deceptive adversaries? Would he reject pleas for televised discussion and the "inning" strategy of keeping gays couples out of the limelight and discussion?

The decision by Steve Smith to not debate the Yes people tarnishes the legacy of Harvey. It also is a lost opportunity to debunk some of the lies about gay marriage and Prop 8.
Posted by Unknown at 6:12 PM
Email ThisBlogThis!Share to TwitterShare to FacebookShare to Pinterest

Although I think marriages ought not be managed by the State -- straight or gay -- I do believe in equality and choice, and am willing to fight for them. Then I read a response to a debate proposal like Steve Smith's, culminating in a snide, bitchy comment reminiscent of Joan Collins in Dynasty: "The only debate worth having in California is why you have pursued such a deceptive campaign strategy. That debate is one you can conduct alone – with your conscience."

The other points raised in the fax could be covered in two minutes of debate, with a strategic focus on Prop 8 filling the remainder. Why on earth would they turn this down? Unless there's a really compelling justification, unexpressed in this response, it makes me feel that people like Smith don't actually deserve to be married, but to rather conduct their relationships, unrecognized, alone - with their wit.

To say that marriages "ought not to be managed by th state," Clinton, indicates that you -- like so many other people have no understanding of marrriage wahtsoever. Marriage is a contract with the state.

Mariages may be performed by priest, rabbis, justices of the peace and duly accredited Elvis impersonaotrs. ATHIESTS CAN GET MARRIED !!!! The relentlessly greedy cooptation of marriage by organized religion is part of their pack of lies. Wake the fuck up, si'il vous plait.

Did you read the letter? They were proposing a debate about the effects on what is taught in public schools. I agree with Steve Smith--that issue is unrelated to the civil right at stake. Why are you criticizing this smart move to deflect more of their lies and scare tactics?