Boring: Phelps Klan Pickets Paul Newman Tribute
How much of a snoozer was the protest on Monday night at Davies Symphony Hall, by the homo-haters belonging to the Fred Phelps klan, there to picket a tribute to Paul Newman?

It was so boring I left after 15 minutes. Same goes for the BAR photographer and reporter who showed up. I saw lots of cameramen and reporters, but they were looking for stars there to honor the late actor and humanitarian.

A few pics from the corner of Van Ness and Hayes, around 5:15 pm yesterday: 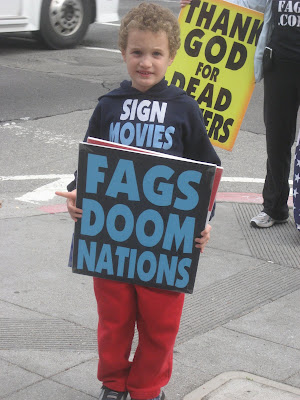 Isn't he just the most adorable homo-hater in training you've ever seen? Child welfare advocates should raise a stink about how this kid from Kansas was taken out of school, brought across state lines, to spread this kind of message. I'd rather kids attend their lesbian teacher's wedding at City Hall and not stand on street corners peddling lies. 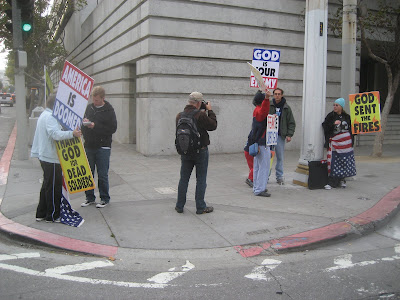 In the dark clothes, center and center-left, are the BAR folks. I count four adults and one child from the Phelps crew, standing with signs and stepping on the American flag. 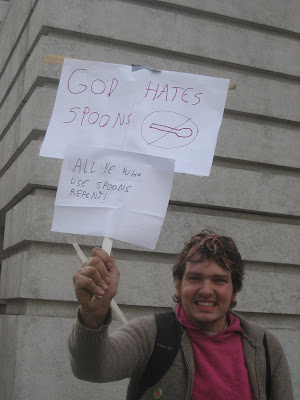 This young man arrived at one point, with his "God Hates Spoons" sign, and proceeded to tell me that "God hates cars. God hates pollution. God hates mean people." 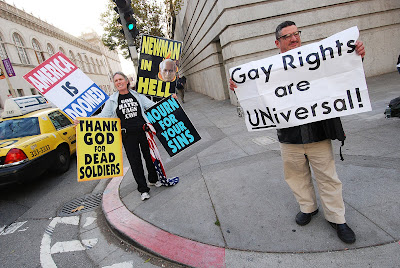 The woman on the left is singing "God hates America," to the tune of Irving Berlin's "God Bless America." Kate Smith she ain't. Why am I holding a sign about gays and the United Nations? I used it last year when Hank Wilson and I zapped Secretary General Ban Ki-Moon, and it was the only sign I had that folded up and fit neatly in my bike bag.
Photo credit: Rick Gerharter.
Posted by Unknown at 7:57 PM
Email ThisBlogThis!Share to TwitterShare to FacebookShare to Pinterest

Thanks for your always tireless efforts.

While the young kid probably has no idea what he is doing, his presence there is the most disturbing.

A few years ago I did a telephone interview with Fred Phelps' grandson, Benjamin. His pleasant tone and level of engagement in our interaction was alarming in how easily it masked the hate inherent in his thinking, and how much his thinking has been influenced by his grandfather.