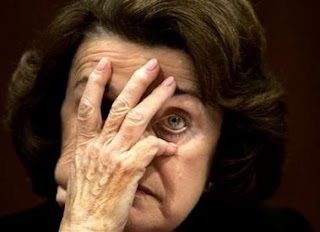 MIA: Feinstein, Boxer, Pelosi & Prop 8
Over at the TruthDig site, veteran gay socialist leader and writer Scott Tucker has penned a long examination of the gay marriage and Prop 8 fight, and he raises a troubling question that needs to be answered now: Where are are the voices and bodies of leading CA Democrats?

As with so many questions about the No on 8 strategy, like why are no gay couples featured in our side's TV ads and promotion of gay marriage is verboten, the issue of our state's reps to Congress status as persons missing in action is one more question I've heard people say should wait until after the election.

"Let's leave the criticism of the campaign and Feinstein, Boxer and Pelosi till November 5 and put all energy into get-out-the-vote efforts," I am told. I can't swallow this advice.

We need real loud words and visible actions from our state's politicians, who say they're friends of gays and oppose Prop 8, whether Democratic or Republican, in the remaining eight days before the election.

It's troubling to see our supposed political friends doing so little, if anything, to actively push voters to oppose Prop 8, and it's also disturbing that the No on 8 leadership is spinning yet another gay journalist who dares to raise uncomfortable questions. The gay community deserves better than "evasions and obfuscation" from the directors of our No on 8 campaign.

I'm proud to share a relatively short passage from Tucker's piece at TruthDig.com and to link to it. Take the time, please, and read all of what Tucker has to say. Click here for the full article:

The No on 8 coalition includes many reliable liberal groups and individuals, but as of Oct. 24, no television ad featuring the leading Democrats of California has brought the No on 8 message to the general public. No political courage was required for U.S. Sen. Dianne Feinstein to tell a gay magazine, “I believe we should uphold the ability of our friends, neighbors, and coworkers who are gay and lesbian to enter into the contract of marriage.” This message would have more reach and power if Feinstein dared to use the megaphone of the mass media. U.S. Sen. Barbara Boxer has not campaigned aggressively against Proposition 8 either, and has also not yet appeared in any television ad.

Likewise, the political capital that Rep. Nancy Pelosi has spent on this issue is spare change, but many Democrats will give her a “pragmatic” pass precisely because she is speaker of the House. A perverse logic operates in this case. If Pelosi refuses to wield congressional power in a fair fight against imperial adventures and war budgets; if she rules impeachment out of order and sidelines Rep. Dennis Kucinich and other dissenters in her own party; if she goes along to get along with the corporate oligarchy … then why should anyone expect her to risk a political bruise in defense of gay marriage?

I tried to discover whether the No On 8 forces had tried to enlist Sens. Boxer and Feinstein or Speaker Pelosi to appear in TV ads, as state Superintendent of Public Instruction Jack O’Connell has done. Speaking to a number of officials and spokespersons for No On 8 and Equality California, I encountered evasions and obfuscation but no straight answers. I can only conclude that the anti-Prop. 8 forces are willing to provide cover for the reluctance of California’s Democratic leaders to be publicly identified with an issue that might not play well with segments of the party base.

Hey Scott Tucker, keep pointing out our MIA political pals and the questionable media strategies of the No on 8 directors.
Posted by Unknown at 9:48 AM
Email ThisBlogThis!Share to TwitterShare to FacebookShare to Pinterest

These "Super-Democrats" had better step up to the plate if they expect Gay and Lesbian support in the future. If Pelosi, Feinstein, and Boxer came out against Prop 8, they wouldn't be "losing" support from anyone they wouldn't have lost support from already. Everyone knows they are quite liberal (good for them!), and they have far more to risk by alienating all of the gay & lesbian support then alienating the antigay portions of the Democratic base. Such cowardice. They can't have it both ways: Either they come out against Prop 8 publicly, or they lose the faith of Gay & Lesbian Democrats. I've worked my ass off at times campaigning for one or more of those three ladies; I expect some support in return. These three witches stirring the Democratic cauldron can summon some courage and denounce Prop 8; they won't be losing any friends they haven't already lost years ago.