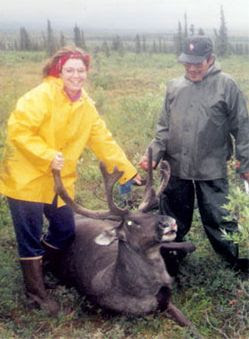 AK Paper: McCain/Palin Reply on Gay Proclamation
The Anchorage Daily News' blog today carries an interesting story about gay Alaskans attempting to use the governor's power of the proclamation process to advance social acceptance of gay people in the state. I'm perplexed as to why Palin and her campaign offer up a paragraph or two about why she wouldn't sign a pro-gay decree. Palin spoke some great lines in her debate with Joe Biden endorsing tolerance of gay citizens, and the proclamation would have been an effective means of translating her words into deeds.

Let's look at the story, written by Kyle Hopkins:

This week a gay rights group called Alaskans Together for Equality asked Gov. Sarah Palin to sign a proclamation supporting "National Coming Out Day" this Saturday ...

"It would be a great statement of -'Maybe I don't support gay marriage, but I want to show respect for these important members of a diverse Alaska population,'" said Tim Stallard, a Fairbanks guide and the group's vice president.

He said San Francisco blogger Mike Petrelis - who in the past few weeks has donated the books "Daddy's Roommate" and "Heather's Two Mommies" to the Wasilla library, and donated male and female condoms to Wasilla High School - helped come up with the idea.

"Thank you for requesting a proclamation designating October 11 as 'National Coming Out Day.' Unfortunately, your request cannot be granted at this time," the constituent relations coordinator wrote in an e-mail.

"National Coming Out Day" is an annual event, managed by a group called the Human Rights Campaign. Are other governor's being asked to sign similar proclamations around the country?

I asked the Human Rights Campaign this afternoon. They said they'd have to get back to me. So far, I can't find any signs of a similar effort in other states.

A bit of history on asking governors to sign such proclamations. When he was governor of Arkansas, Bill Clinton was asked by a local gay advocacy organization to sign one, and he consistently refused to do so.

Regarding the notion that other governors should be asked to issue such proclamation, it's a great idea that should be implemented by the National Coming Out Day project of HRC.

Here's the thing: Palin leans to the far right on many social issues such as guns and abortion, but has appeared closer to the center on gay rights.

One of her first actions as governor was to veto a ban on same-sex benefits for public employees. (Though she said at the time she had little choice because the ban would be ruled unconstitutional. She has consistently opposed gay marriage.)

When we asked her in 2006 whether she believes people choose to be gay, she said she didn't know.

Hopkins and his paper deserve praise from our community for raising gay questions to Palin, before she was selected for the national GOP ticket and for reminding readers of her views in 2006.

In a recent interview with Katie Couric, she talked about being gay as a decision:

Was her phrasing there important? Has her view changed? Was it her call not to sign the proclamation, and if so, what played into that decision?

I sent a list of those and related questions to the McCain-Palin campaign. Spokeswoman Maria Comella replied with a blanket statement that addressed the general topic but didn't answer any of the specific questions.

"While Governor Palin supports traditional marriage, she has consistently opposed all forms of discrimination against people with different lifestyles. As Governor, she vetoed a bill that would have prevented gay state employees from receiving state benefits, and a McCain-Palin administration would promote tolerance among all Americans," she wrote in an e-mail.

Much gratitude again to reporter Hopkins for posing gay-related questions to the campaigns officials. Frankly, for all the self-inflated importance of Palin/McCain being mavericks, their wimpy non-replies to questions about the proclamation won't win them votes independents and undecided voters.

Also: How does the proclamation process work?

According to the state Web site, Palin has proclaimed this week as "Alaska-Taiwan Friendship Week," "Week of the Classroom Teacher" and "Biomedical Technician Week."

We asked Palin's office those questions this afternoon, but gubernatorial spokesman Bill McAllister said no answers are coming today.

World farm animals rate a proclamation, but gay citizens of Alaska don't? Says a lot about Palin's commitment to some of her human constituents. When Palin returns to being governor full-time on November 5, and she will, I hope Tim Stallard and Alaskans for Tolerance and Equality request other gay related proclamations, while also pressing her on legislative and political issues.
Posted by Unknown at 10:28 AM
Email ThisBlogThis!Share to TwitterShare to FacebookShare to Pinterest