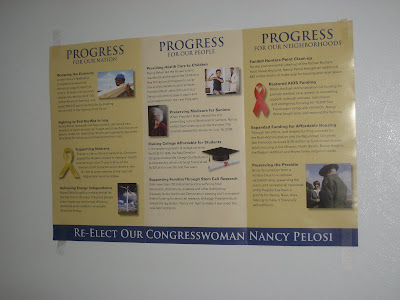 Pelosi to Gays: Drop Dead
I am represented in the House of Representatives by the very unrepresentative Nancy Pelosi, who in her latest mailing to voters, which arrived in my mailbox over the weekend, omits mention of either gay rights or Prop 8.

Speaker Pelosi, who ignored her constituents' overwhelming support for impeachment proceedings against George W. Bush, sure isn't knocking herself out to help the gay community this election and stop the ant-gay-marriage ballot initiative.

Not a single mention of gay marriage rights or Prop 8, and that mailer is not the only piece of evidence of Pelosi's silence on gay couples and marriage equality. Her Congressional web site shows her last press release on gay marriage was back in May and there's nothing posted about Prop 8, certainly nothing urging voters to oppose it.

In her August 27 short tribute to Del Martin on her passing, and the work of her and her wife Phyllis Lyon over the decades for gay equality and marriage, Pelosi was characteristically mum on Prop 8. Click here to read the tribute.

Then on October 1, for the memorial service for Del Martin at City Hall, Pelosi released a much longer tribute, this time heralding her opposition to DOMA, but again stopping way short of saying a word about Prop 8 and any effort to encourage voters to reject the measure. Click here for the full statement:

“In times when my colleagues and I have debated legislation that seeks to divide our great nation, I have brought to the House floor the example of Del and Phyllis’s deep and abiding love.

“I invoked Del and Phyllis first in 1996 as I spoke in strong opposition to the ill-named Defense of Marriage Act, then again ten years later against the constitutional amendment to prohibit same-sex marriage.

“I told my colleagues about Del and Phyllis’s commitment to each other and how this is a source of strength and inspiration to all who know them, and how much courage it took to love someone in a time when their relationship was not met with respect and understanding. I asked my colleagues to explain how their relationship was a threat to anyone's marriage, and why Del and Phyllis should not be treated equally under the law.

“What a beautiful moment it was this June, when because of Del and Phyllis’s decades of advocacy, the great state of California affirmed marriage equality. As they always have, Del and Phyllis led the way, becoming the first of many gay couples to affirm their commitment ...

“And so, in Del Martin’s name, let us go forward to continue the fight for justice and equality.”

Would Pelosi have been struck with a nasty infection if she had been brave enough to say continue Del Martin's fight for full equality and work to defeat Prop 8?

And her Wikipedia entry contains this bit of falsehood, which to be corrected:

When the Supreme Court of California overturned the state's ban on same-sex marriage, Pelosi released a statement welcoming the "historic decision" and voiced her opposition to Proposition 8, which seeks to define marriage as between a man and a woman in the state.[74]

That citation, number 74 in her Wikipedia page, links to her May statement on the CA Supreme Court ruling and says nothing about her opposition to Prop 8.

As we know, that statement says nothing about the proposition.

I've Googled "No on 8, Pelosi" and "Pelosi opposes Prop 8," and variations, but no hits came up for Pelosi official statement, if she's made it, opposing the initiative.

If I've not used the right search terms, either at Pelosi's House site or with Googling, for her formal comments opposing Prop 8, and you have the text of it, please share it with me and I'll post it to my blog.

Click here to read the six citations on Pelosi's site for "gay marriage." I can't find a thing on her site about Prop 8, can you?

With pals like Pelosi ...
Posted by Unknown at 10:37 AM
Email ThisBlogThis!Share to TwitterShare to FacebookShare to Pinterest

Some vinegar and water for the Speaker of the House...

Fuck her and the horse she rode in on. And that goes double for Di-Fi -- who owes her jobe to Dan White.