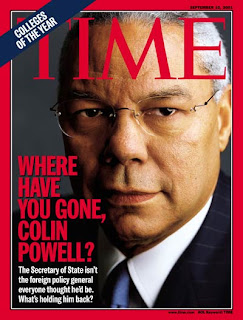 SF Chron: Bush to Powell:
'Hold Off' Endorsing Obama
I'm no fan of former SF Mayor Willie Brown and the hyperbole that usually goes into his weekly column for the Chronicle, so I don't put much stock in this item from his column this morning:

By the way, remember that prediction about former Secretary of State Colin Powell endorsing Barack Obama?

My contacts in the Obama campaign said President Bush himself called Powell and asked him to hold off. Asked him not to embarrass the administration.

We'll see - but Powell is definitely not endorsing John McCain.

If the black Slick Willie wants me to believe that Bush made such a call, or that Powell is granting the president's request, it will take an official statement from either the Obama campaign or Powell. Brown's word doesn't mean much to me these days.
Posted by Unknown at 10:32 AM
Email ThisBlogThis!Share to TwitterShare to FacebookShare to Pinterest