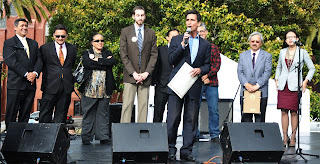 (A flock of self-serving politicians on stage at last week's trans concert. Wiener is fourth from the left.)

San Francisco's Dolores Park was the location on Friday afternoon for the latest edition of the annual trans rally and concert, that take place before the march. It was quite the fabulous affair, seeing lots of trans friends and their allies, enjoying the musicians and occasional trans speaker making political points.

In the middle of the event, my enjoyment was ruined when Supervisor Scott Wiener began addressing the crowd. I didn't any vocal cheers or applause for him. Wiener talked about how there are many disagreements in the LGBT community at other times of the year, but Pride time was the season to put those disagreements aside and celebrate our diversity. His words made me want to barf.

Throughout the past year Wiener has worked to undue historic preservation protections, put a ballot measure before the voters to dilute previously passed measured, stigmatized nudists and homeless people in the Castro district, refused to support community control of the city-owned rainbow flagpole on municipal property at Harvey Milk Plaza, worked behind the scenes to eviscerate the Sunshine Ordinance Task Force, and generally engaged in behavior indicating he wants to be mayor.

Wiener essentially told us to put all his damaging work aside, so he could look good at the trans rally and shore up votes for his next election. Wiener was not the only self-serving politician to speak from the stage. State Senator Mark Leno and Mayor Ed Lee also were given mike time.

When I asked one trans friend why it was necessary to have Wiener address the rally, she said it was a courtesy to him because the rally was in his district. I recommended that she ask him to place the Harvey Milk Plaza rainbow flagpole under community control, so trans people could use it for occasions such as the annual Transgender Day of Remembrance this November.

Get something of substance in return from Wiener for granting him the privilege of speaking at the rally, starting with lowering the rainbow flag at Harvey Milk Plaza this November to honor all the murdered and brutalized trans people in the previous year, I said to my friend. Heck, why not request Wiener lower the flag _now_ to remember Brandy Martell, pictured, the trans woman who was murdered in Oakland in May and call attention to the fact that the cops have made no arrest in the case?

My friend said she would think about it. She asked me to put the idea out there on my blog, which I am happy to do today.

Posted by Unknown at 12:34 PM
Email ThisBlogThis!Share to TwitterShare to FacebookShare to Pinterest

I'm sorry your time at the Trans March was ruined by the self-serving Supervisor, who was only there to get himself more media attention.