SF's Faerie Pride Poster:
'Not Every Boy Wants to be a Soldier' 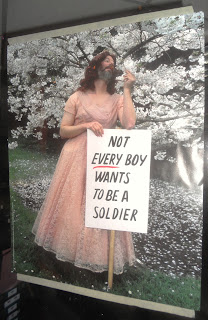 For more years than I care to count, official Pride events from coast-to-coast have put gay soldiers on pedestals as they either willing exited the closet or were tossed from service by military brass. We've had a steady stream of instant heroes and heroines wearing uniforms and waving more-patriotic-than-thou rhetoric in the faces of queer peaceniks.

Did any of these military homos ever offer up criticism of U.S. wars, the Pentagon's budget and how it sucks trillions of dollars out of the federal cash register, money that could go toward affordable housing, education and health care services and so much more for millions of LGBT Americans who aren't in the armed forces? If they did, I missed their comments.

Generally, what I recall was a narrow focus exclusively on allowing gays to openly serve in the army. Period. End. Of. Story. Now, with Secretary of Defense Leon Panetta touting the military's first-ever Pride event and singing the praises of diversity and equality as America's greatest strengths, and an influx of open gay servicemembers at Pride parades with the repeal of Don't Ask, Don't Tell, I want to look back to 1993.

I first want to say that I'm not interested in Panetta using the buzzwords diversity and equality, because it's co-opting the community in effect and ignores the two recent U.S. wars that have led to such domestic devastation. Don't try and sell me gay military equality as key to the nation's agenda. Talk to me about cutting DoD's budget.

I fear the day when we see the first DoD poster include a rainbow flag, or on a drone or missile. Sure, laugh at such an image of rainbow flags on U.S. bombs, just as we all once chuckled about the homo military ban ever being lifted.

Back in the spring of 1993 and the few months of Bill Clinton's White House tenure, there was a gay March on Washington and one of the central items on the gay agenda was the military ban on homosexuals.

Amid all the patriotic chest-beating by Gay Inc a beautiful counter-message was seen on the streets of the capitol, with no group name or credits attached to the project. It was the poster at top, of the bearded man in a pink gown behaving like a queen and holding a sign saying "Not every boy wants to be a soldier". A timely message for today.

Tonight I took the photo of the poster that hangs at the Faerie Village on Market Street in the Castro District, when I stopped by to see the Radical Faeries temporary home during Pride Week. I heard a rumor that the poster may make an appearance during the Pride parade on Sunday.

We can only hope it happens.
Posted by Unknown at 11:59 PM
Email ThisBlogThis!Share to TwitterShare to FacebookShare to Pinterest

You are mixing up and treating as one, two entirely different questions: "Should LGBT citizens have the right to serve in the armed forces?" and "What should be the role of the armed forces in our country?".

There is a lot wrong with the military industrial complex and the billions of dollars we waste on it. But that has nothing at all to do with the question of queer folk having an equal right, and obligation in case the draft returns, as their hetero brothers and sisters.

To use your own words "Generally, what I recall was a narrow focus exclusively on allowing gays to openly serve in the army. Period. End. Of. Story." Yep, and that's all it should be about, the struggle for equality. Other questions need to be asked in their own context. I've spent time in jail myself after being arrested for anti-war actions, but those things have nothing to do with our struggle as LGBT people to be treated equally.

Equality means just that. It simply means being treated the same way I would be if I weren't queer. It has nothing to do with whether or not I believe in the death penalty, or a big or small military or which is better, an afternoon listening to show tunes or watching football.

I disagree about the issue of gays in the US military is isolated from the other matters, such as the Pentagon's budget or the two recent wars. If equality is only about gays getting a piece of the military pie, then something is wrong with our concept of equality.

My father is the man in this poster. I'll be sure to pass along this article for him to read, I'm sure he'll find it very interesting. Thanks! :)