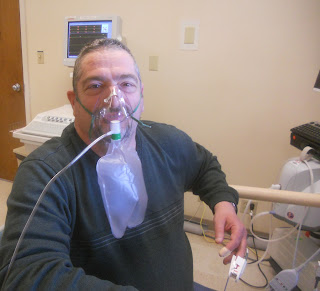 After my bout with pneumonia in April that put me in Davies Hospital for three-days, and completing a long regimen of antibiotics and inhalants, the time has arrived for follow up tests.

I now have a pulmonologist among my stable of specialists, Dr. Frank Delen, to advise me. My first consultation with him lasted just over an hour, because he was so thorough in getting my medical history. During the exam, he took notes on a laptop while I used a paper pad, and he was pleased I showed up with questions for him written down.

Last week, I went through a two-hour battery of pulmonary tests with a friendly youngish technician named Nicole. For the tests measuring my lung volume, she had me sitting in a metal and glass booth with a plastic mouthpiece in-between my lips, moist with lip balm. After making me pant heavily, she instructed me to exhale as hard as possible repeatedly urging, "Blow! Blow! Blow!"

The second time Nichole gave me those instructions, I cracked wised about how there commonalities between the pulmonary clinic and the Blow Buddies sex club. She confessed that as a straight girl, she didn't know about such places and would take my word for it. We got along fine with lots of laughs, which eased my usual nervousness having any medical tests performed.

The photo shows me during oxygen diagnostics, wearing the same kind of rubber medical mask I used during my hospitalization when the nurses had to administer a mega-dose of albuterol. In the hospital, the mask had the vial of albuterol attached at the bottom, not a plastic pouch as in the picture.

Today I head back to the Davies campus for lung X-rays and a blood draw. Nice to feed two birds with one seed. Next week is when I consult with my pulmonologist and regular medical doctor at Castro Mission Health Center, Fred Strauss.

Please, dear Lord, let me have test results as good and as fabulous as I feel on this beautiful San Francisco day.
Posted by Unknown at 12:32 PM
Email ThisBlogThis!Share to TwitterShare to FacebookShare to Pinterest

Well, I do hope all will be well with you. After all, you still are full of Piss and Vinegar :0)

hi gary, nice to hear from you and hope you're doing well these days! best, MP