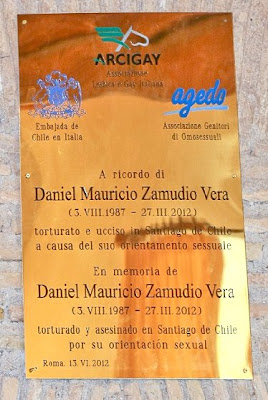 In late March, Chilean gay youth Daniel Zamudio was brutally and fatally assaulted, including branding with a swastika by neo-Nazis, and despite extensive medical care died from the attack. Around the globe, LGBT people and our allies mourned the tragic loss of this young man.

This week, my friend Stefano Bolognini who is the spokesman for Italy's ArciGay group sent a report and photos from Rome about the plaque they created in memory of Zamudio. The plaque is now permanently on display on at the ArciGay offices on Via San Giovanni. Here is an explanation of this public remembrance:

The plaque reads, in Italian and Spanish, "In memory of Daniel Zamudio Mauricio Vera (3.VIII.1987 - 27.III.2012), tortured and killed in Santiago de Chile because of his sexual orientation" and shows the logos of ArciGay, Agedo, which is the association of parents of gays, and the Embassy of Chile in Italy.

The plaque initiative is intended as a reminder of the collective memory of the barbarities of homophobia and transphobia and a warning to Italian institutions on the urgency of practical responses to violence and discrimination of homosexuals, lesbians and transsexuals. 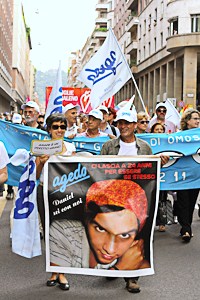 What else has Italy to remember Zamudio? During Bologna's Pride march last weekend, there was a contingent of LGBT Italians who marched with a banner featuring Zamudio smiling face. Nice to know that months after his senseless death, Zamudio is honored in several ways half way around the world from Chile.

Bravo to the Italian LGBT community and allies for their visibility and solidarity respecting the life and legacy of Daniel Zamudio.
Posted by Unknown at 4:32 PM
Email ThisBlogThis!Share to TwitterShare to FacebookShare to Pinterest