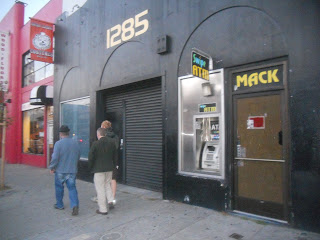 An acquaintance stopped me while shopping at the Castro farmer's market yesterday afternoon, to tell me the Mack Folsom Prison sex club in the South of Market district closed last month.

If a queer men's sex club in San Francisco shutters, shouldn't this be news? I'm not aware of any gay or straight media or blogger attention to the loss of this venue. Surely the patrons of Mack Prison would raise a peep, right?

The web site for the club reports that a co-owner passed away in March, the landlord terminated the lease and their last day of operations at that location was on May 6. The message says the club will reopen in a new location, and I hope they do for all the horned dudes who frequented the place for sexual liaisons and pleasures.

My acquaintance claimed the sister of the deceased co-owner wanted half of the income from the club, and that the surviving co-owner balked at her demand, decided to cease doing business at 1285 Folsom Street with the old name. Rumor has it the co-owner wants to open under a new name. We'll see if that happens.

I'm also wary of promises to reopen in a different spot, because the same commitment came from the owners of the Eagle Tavern and Bar last year when it faced landlord hassles. As we all know, the Eagle owners have yet to keep that commitment they made to the community.

There are now only two gay sex clubs in San Francisco, Blow Buddies and Eros. Here's the message from Mack Folsom Prison site:

Posted by Unknown at 11:47 AM
Email ThisBlogThis!Share to TwitterShare to FacebookShare to Pinterest