Over the weekend, I looked at the San Francisco Ethics Commission's page for gifts of travel disclosures filed by members of the Board of Supervisors. The most recent disclosure filing was from my Supe, Scott Wiener. Thanks to redistricting, the BF and I are incorporated into the District 8 boundaries.


The filing reveals that Wiener, along with colleagues Carmen Chu and Malia Cohen and twenty-five or so other powerbrokers primarily from SF, went on a ten-day junket to Israel leaving on March 15 and returning on March 25. Purpose of the trip? It was a "study tour of Israel organized by the San Francisco Jewish Community" and was funded by the Jewish Community Relations Council. What does the council expect in return from the politicians? 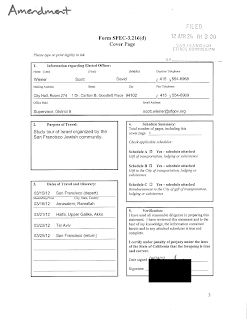 Nice way to get an expenses-paid vacation to Israel, but I wish we knew what the heck was of such critical importance to San Francisco voters that three Supervisors jetted off to Jerusalem for ten-days - at a time when the local economy stinks, the budget's being debated and jobs for the unemployed can't be found.

Question: Did Wiener, Chu and Cohen arrange to not receive their taxpayer-funded salaries for the time spent in Israel, when they were not carrying out city duties?

An answer cannot be found from the minutes of the March 20 full Board meeting that took place while the Supes absent. The first item was a motion from Sean Elsbernd, seconded by David Campos, to excuse their three colleagues from voting, and it passed unanimously by the eight Supes present.

So, the junketeering Supes made no arrangements to have an explanation read into the public record about their absences, and their colleagues went along with keeping the public in the dark.

Wiener, who usually tweets about every opening of a window that he attends, was silent on Twitter about the trip: 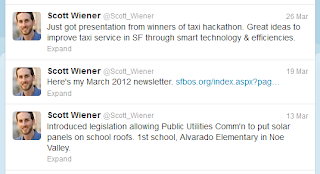 During the time spent in Israel, he tweeted once; to announce his latest newsletter was available. Why did he keep mum regarding the trip? The same question needs to be asked of Chu and Cohen.

These Supes need to immediate sunshine their reasons for taking the junket, how it benefited the city, what the Goldman Fund expects in return and if they weren't receiving their city salaries while junketeering.
Posted by Unknown at 4:01 PM
Email ThisBlogThis!Share to TwitterShare to FacebookShare to Pinterest