Carl Goodman, My Friend & ACT UP Co-Founder, Has Committed Suicide 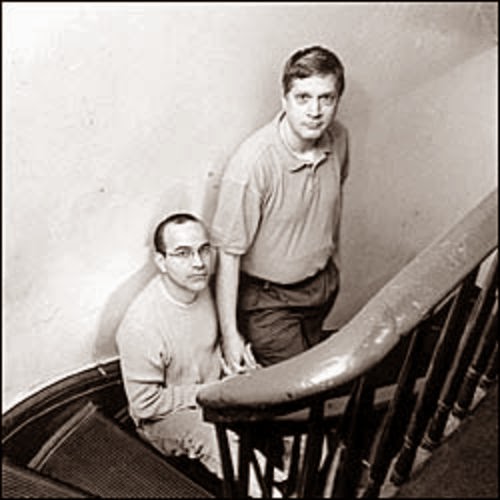 (Mario, left, and Carl in the stairwell of their NYC apartment, as they were fighting an eviction and taking their plight public in October 2000. Credit: The Village Voice, Carl Asnin.)

Earlier this morning, I spoke with my friend Mario Cavero who told me the tragic news that his beloved husband and my cherished friend had died yesterday in Bristol, Rhode Island. Sobbing with sadness, I needed to get off the phone and grieve and Mario understood and said we would of course talk again later. This news was a shock and totally unexpected.

When I checked in with our friend Wayne Harris up in Portland, Oregon, he delivered the news that Carl had committed suicide and we both had to process that info. Wayne shared this story from the East Bay RI news site:

A Bristol man jumped to his death off the Mt. Hope Bridge Sunday afternoon. Carl Goodman, 58, of Bristol, was pronounced dead at Rhode Island Hospital at 4:42 p.m. Jan. 5.


Police and firefighters were called to the base of the bridge on Lower Ferry Road at 3:53 p.m. A caller had reported seeing a man on the bridge looking over the side. According to the Bristol police log, the “male jumped, is under the bridge on land.”

As I've gone through my morning routine, with tears and sadness, and a few giggles at the good times we shared over the decades, I have tried to come to grips with the fact that Carl was surviving all these years with AIDS and chose to end his life with an act of suicide.

In the BC era, before cocktails, Carl and I met and became friends when I was in the Mob and he was partnered with Tom Hannon, and together they were key individuals in the underground drug and then buyers club movements.

Carl heartily approved of the activism and strategic zaps we ten or so members of the Lavender Hill Mob carried out. In February 1987, after the Mob had appeared at and disrupted a CDC conference in Atlanta about a Reagan administration proposal of mandatory HTLV-III testing, putting anger and access to treatments on the agenda through media attention we brought about, Carl and I were excited that Larry Kramer was soon to speak at the NYC gay community center about the crappy state of AIDS.

Carl was with me at Larry's now-famous talk that led to the formation of ACT UP and participated in many early actions, and was an occasional member of the Treatment + Data Committee.

Ok, the tears are flowing again as I write this and in the background I'm listening to the classic album "Gonna Take a Miracle" from Laura Nyro and LaBelle. One of my earliest and fondest memories of time with Carl and Tom Hannon at their Greenwich Village Perry Street studio was listening to the album and we three queen singing along with the girls.

Rest in peace, Carl. You were and are very much loved.

UPDATE #2: I've posted a fond remembrance of a political project Carl and I worked involving Bill Clinton and the Arkansas sodomy law from 1992. You can read the remembrance here.

UPDATE: This info comes from my friend Melanie Nathan and I'm so happy she has reached out to me, and this is important information to share if you are experiencing mental health problems causing you to consider killing yourself:


How to find help if you feel suicidal

If you or a young person you care about needs support, call The Trevor Lifeline at (866) 488-7386. It?s free, confidential and available 24/7. Learn more at TheTrevorProject.org.

I am sick to my core. There are no words.

I knew Carl from the days when we were in Dignity together, the gay Catholic group, in the mid 1970s to early '80s. Always a great guy and cheerful comrade. I believe he was hounded out of his rent stabilized apartment in New York some years ago by a rapacious landlord invoking the clause that lets them take your home for their personal use. I am grateful for his life.

I didn't know him but am grateful for his pioneering activism which has helped so many, including me as a long-term HIV/AIDS survivor. My sincere condolences to his partner, family, and friends. It's also a lesson for us to make sure we have safeguards in place for our continued survival; watch signs for help in those around us; and know how to reach out for help ourselves. Thanks.

I'm heartbroken. Carl was a good man, generous, funny, intelligent and a wonderful friend to our family for years. He will be missed.

Michael, I am so incredibly sad to hear this news. Carl was just such a nice, decent human being. What a horrible loss..

Very sorry for your, and all of our, loss.

Sorry to hear of this loss, Michael, and your grief of losing a friend. There are no words that can comfort us when one we love chooses an act that robs us of any chance to help. But we can find some comfort in treasuring that friendship always.

Thank you, all, for expressing your kind thoughts about Carl, offering condolences to his surviving husband Mario Roberto, and all of us who are grieving over his death. You're making the grieving easier to bear for me. Hugs back at you!!

Condolences all around. I understand that feeling, it took a lot of guts. So sorry that he felt that alone. Sad end to a good life.

Condolences to you, Michael, and may his soul Rest in Peace.

While, I did not know him I am sadden by his death. My most sincere condolences to you and his other family members. Gone to soon...

As a woman who is a PWA can't express my gratitude to Carl and others for having the insight to create ACTUP.You saved countless lives and I thank you for saving mine.Carl will always be remembered as a humble warrior.
In Solidarity,
Mary Lucey

Depression looms large as part of the AIDS epidemic. Suicide is sometimes chosen. A number of groups, like Treatment Action Group, are now encouraging the study of depression in the AIDS impacted. Spencer Cox is an example of a knowledgeable PWA who stopped taking his medication. Good mental health professionals can be crucial. Often they are attached to Medical Schools. Forming or becoming part of groups which limit isolation are good.