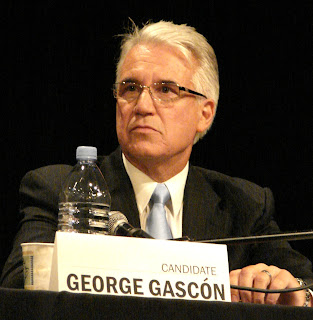 My Immediate Disclosure Request to the District Attorney's office for public records related to the following trips by George Gascon produced answers. Records released to me are here.

Let's go over the trips, their purpose and how much of the bill was footed by San Francisco taxpayers for these junkets. I consider all of the law- and government-related conferences that elevate the DA's standing among his peers, but there is negligible benefit to average citizens, and the third trip was without doubt a personal trip to stroke the DA's ego.

3) May 10, 2012, to Long Beach to attend the California State University at Long Beach's Alumni Awards at his alma mater;

Cost to taxpayers: $207 for airfare. Gascon received a Distinguished Alumni Award from his alma mater California State University at Long Beach, and this in no way should be considered vital business for our DA. I sure hope he was not on The City's clock for what is plainly a personal trip no way related to his prosecutorial duties.

4) January 22, 2013, to Los Angeles to attend the Council of State Governments meeting;

The total amount the DA charged to The City for these junkets comes to $1,438, a drop in the budget for the DA's office. My point in following the money spent by Gascon is to provide more public service in sunshining how he uses public dollars.

I also want to bring transparency to his travels out of town and question why he travels, and how it is of direct benefit to the citizenry to have the DA on the road. Add these four trips to the one he took in June 2012 to Phoenix, Arizona, which was paid for by an outside source and he violated municipal law by not filing a travel disclosure prior to boarding the plane, and we have five trips of Gascon's receiving some scrutiny.