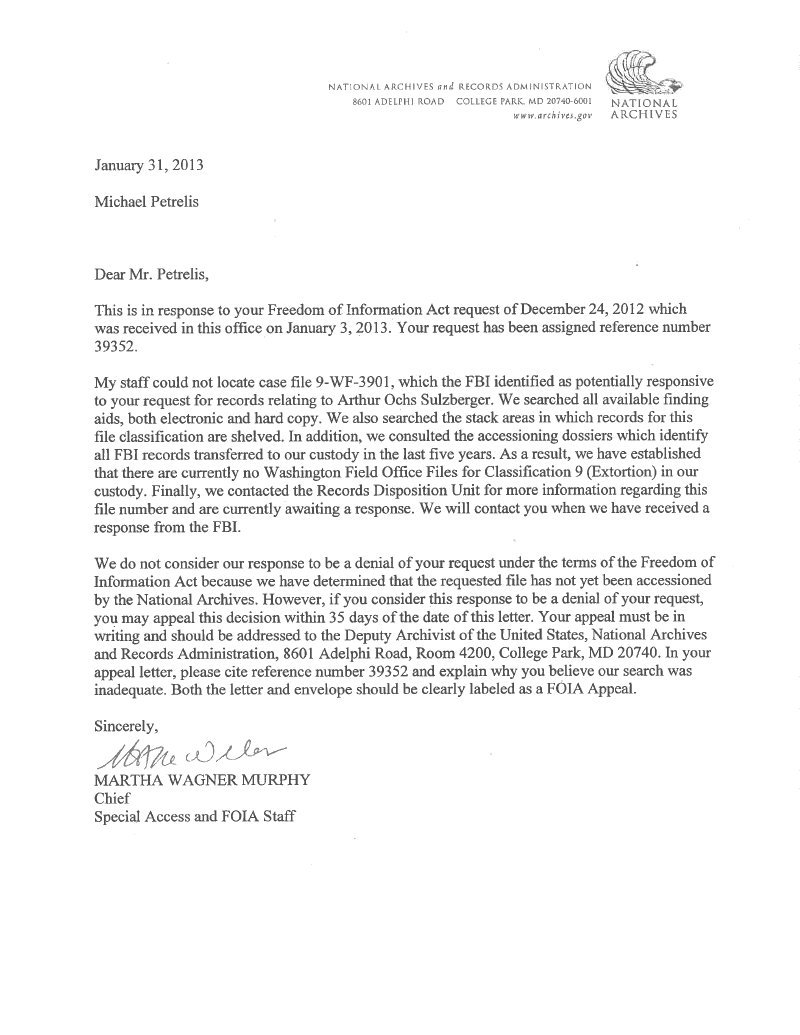 At the end of last year, I blogged about the Federal Bureau of Investigation's reply to my FOIA request for any and all files they possess on the late New York Times publisher Arthur "Punch" Sulzberger.

The agency said potential records responsive to my request may have been transferred to the National Archives and Records Administration, and that I needed to file a new FOIA with them. I did and this week NARA sent a letter, pictured, with the surprising info that the FBI's classification number for what be Sulzberger's file pertains to extortion. NARA said:

My staff could not locate case file 9-WF-3 901, which the FBI identified as potentially responsive to your request for records relating to Arthur Ochs Sulzberger. We searched all available finding aids, both electronic and hard copy.

We also searched the stack areas in which records for this file classification are shelved. In addition, we consulted the accessioning dossiers which identify all FBI records transferred to our custody in the last five years.

As a result, we have established  that there are currently no Washington Field Office Files for Classification 9 (Extortion) in our custody.

Finally, we contacted the Records Disposition Unit for more information regarding this file number and are currently awaiting a response. We will contact you when we have received a response from the FBI.

Let me see if I understand this. The FBI assigned the potential Sulzberger file with an extortion classification, told me to contact NARA and now that body says they can't locate the file the FBI referenced, so NARA has gone to the FBI seeking more details.

This troubles me, that the FBI, the one national agency we would very much expect to be much better about tracking its voluminous records, is quite sloppy about maintaining and transferring them.

In September 2009, in response to my FOIA request, the FBI admitted it may have destroyed the file on another iconic newsman, Walter Cronkite. Jeez, is it asking too much of the FBI to retain these files, or if they are to destroyed to keep records of what is shredded and dumped?

After the FBI sends a reply to NARA and it is shared with me, I'll blog about it.
Posted by Unknown at 6:26 PM
Email ThisBlogThis!Share to TwitterShare to FacebookShare to Pinterest