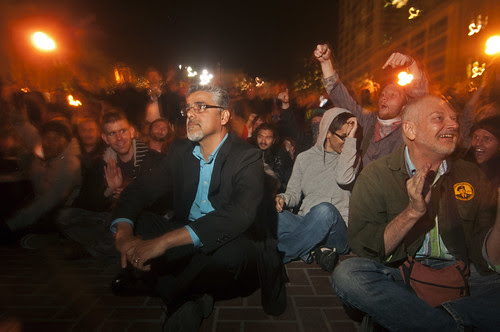 If you feel a hot wind blowing through the streets of San Francisco, it's likely to be coming from straight progressive Supervisor John Avalos, pictured center wearing a blue shirt exploiting an Occupy protest for his mayoral campaign in 2011.

Avalos skillfully coopted the energy and anger of Occupy San Francisco at the height of street protests, by introducing worthless resolutions at the Board of Supervisors that did very little to deter the police and health authorities from shutting down the camp sites downtown. Well, it got him lots of press.

In October 2011, a few weeks before the mayoral election where he came in second, Avalos held a hearing at City Hall about creating a municipal bank. The San Francisco Chronicle reported that a few hurdles were in the way:

But the bottom line is that San Francisco can’t create a municipal bank without a change in state law, and that’s not likely to happen any time soon.

However, according to the supervisors’ budget and legislative analyst, the city could pursue alternatives. Among them: Invest city money in local credit unions and community development banks. But that is limited. No more than $250,000 could be deposited in each of those institutions, making the overall pot pretty small . . .

There were a handful of other options outlined, but none offered quick fixes. “There’s more work to do,” Avalos conceded. “I don’t see it as something that’s happening overnight.”

In March 2012, five months after his hearing, when announcing his bid for reelection as supervisor in District 11, Luke A. Thomas of Fog City Journal reported the following quote:

Asked what he hopes to accomplish in the next four years, Avalos said, “We have a foreclosure crisis in San Francisco.  It’s really strong in my neighborhood.  I want to figure out how we can create measures to support households against defaults and foreclosures.  I also want to look at this municipal bank idea, something that I’ve been pushing.”

That was almost one year ago and I asked Avalos and his staff what has happened since then to make the municipal bank a reality. All I got back from the Avalos team was silence.

While he lacks the time commitment to follow through on good ideas, he was able to fly to Washington, DC, in November 2012 to attend a junket for elected progressives, and boost his resume for future elections.

After more than four years as supervisor, I can't think of many signature accomplishments from Avalos. Yes, his local hire legislation was a tremendously valuable and important law, but I can't think of what else he's solely responsible for that has benefited a wide cross-section of city residents.

Providing more evidence that he's politician first and foremost looking to move up the political ladder, instead of creating ambitious solutions at the Board of Supervisors, Avalos devoted himself last year to winning a seat on the Democratic County Central Committee. Great. He now holds two elected positions where he can propose useless resolutions.

Speaking of hot air resolutions, the Bay Guardian last week had this to report:

In addition to the resolution calling for divestment from fossil fuels, Avalos also plans to introduce a resolution urging the San Francisco Retirement Board to divest from publicly traded manufacturers of firearms and ammunition.

The actual and tangible accomplishments of Avalos are damn difficult to list.
Posted by Unknown at 9:23 PM
Email ThisBlogThis!Share to TwitterShare to FacebookShare to Pinterest