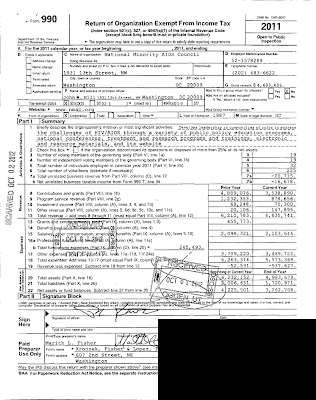 Paul Kawata, executive-director-for-life at the National Minority AIDS Council, is not the least bit interested in providing the public with transparency about his group. You may recall in August we spoke and he was adamant about not posting IRS 990s or annual reports on NMAC's site, while also refusing to link to the 990s.

Compare that dearth of transparency with AIDS United's About Us page containing their three most current 990s and annuals.

So, over the course of the last four-years under Kawata's leadership, NMAC has run up a cumulative deficit of $1.9 million. No wonder he is unwilling to do anything to shed light on this fiscal matter.

Wisconsin-based AIDS accountability advocate Greg Milward brought the latest 990 to my attention and noted that Kawata's salary, despite the huge deficit, jumped to $272,711. Bad fiscal management is no barrier to a raise for Kawata.

Milward also informed me that the former executive director of the National Association of People With AIDS, Frank Oldham, is on the board of directors of NMAC. There seems to be plenty of bad stewardship at NMAC and NAPWA to keep accountability watchdogs busy for months.

Click here to view NMAC's 990s over the last ten years at the Foundation Center site.