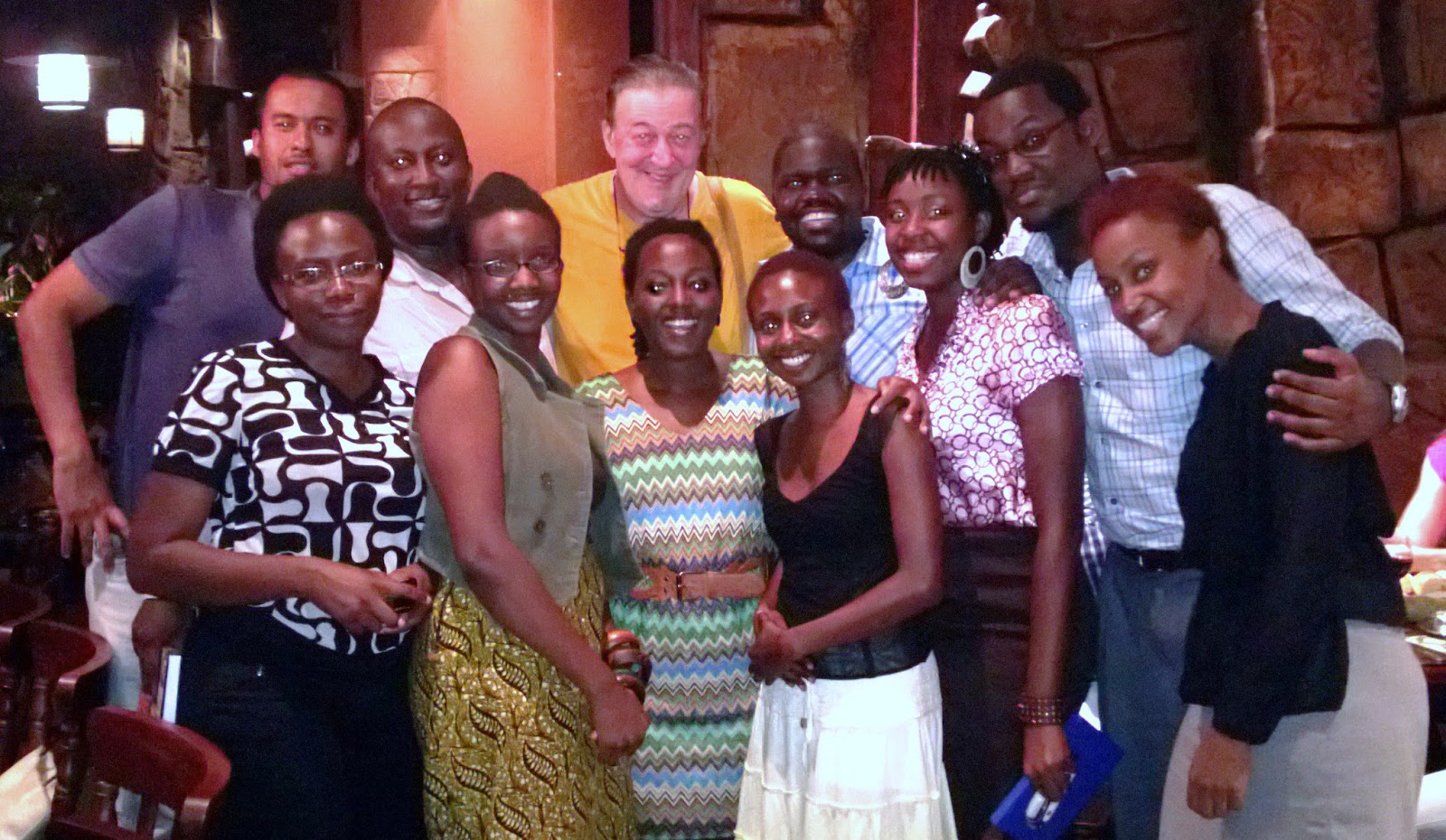 Based on readily available public information, I have updates to share on actor and gay activist Stephen Fry's visit to Uganda, currently underway and generating a good deal of interest in that country and around the globe. My previous reporting is here.

According to his Twitter feed, Fry is busy making a documentary film and he writes, "Had a great morning with the brilliant & wise @jamesonen “Fat Boy” - top radio host in Kampala & his highly unusual & interesting guest."

James Onen's Twitter feed linked to the photo above, showing Fry meeting with members of the Freethought Kampala group. They describe themselves on their site as, "Promoting reason in a highly superstitious society . . . [with a] philosophical viewpoint that holds that opinions should be formed on the basis of science, logic, and reason, and should not be influenced by authority, tradition, religion or any other dogma."

There's an odd post at the Scare-a-Hero site operated by Simon Kahero, who is heterosexual and a big fan of Fry's many talents. Kahero, after learning Fry would be in Uganda, writes:

I therefore went about my day quietly hoping that Fry wouldn’t be chaperoned round Kampala by some idiot focussing on brothels, slums, and funny places run by the worst possible Ugandans available . . . 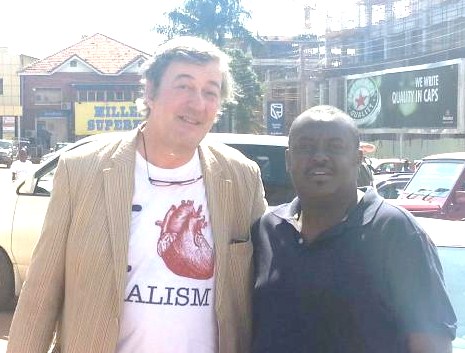 Kahero, pictured on the right, omits mention of Fry's gayness or the still-pending Anti Homosexuality Bill with a death penalty clause for gays in parliament and uses an unwelcome term, about approaching him for a photo together:

I abandoned [my car] with the driver and moved in for the kill, not sure exactly what I was going to tell him but planning to speak up for Uganda . . . while campaigning for anything positive from him . . . “Of course,” he gently acquiesced to my request . . .

Enjoy Uganda, Stephen Fry! And don’t say anything bad or we’ll be on your case . . . Go see the wildlife, eat the local food, and if you meet any daft Ugandans doing stupid things, join us in laughter but believe me, they don’t represent ALL OF US unless you happen to be in Parliament.

That dangerous and draconian bill is at the top of the parliament's "Business to Follow" agenda in coming days, and longtime gay and lesbian watchdog bloggers Jim Burroway and Melanie Nathan share info at their respective sites.

Finally, a commenter at Kaheru's post asks a question about Fry's friend and acting colleague:

Have you seen Hugh Laurie? He’s coming with Stephen Fry to Uganda for filming a video.

To which Kaheru replies:

Hi. Apparently he is already in Kampala with Fry. I am afraid of appearing to be a stalker but I did call the hotel to confirm.

Considering the attention Fry is receiving among Ugandan social networkers, I imagine we'll soon learn if Laurie has joined him over there.

Finally, I hope Kaheru proves himself to be in opposition to the Anti Homosexuality Bill and someone who supports full human rights and protections for the sexual minorities of Uganda. I'm sure Fry would ask the same of Kaheru.
Posted by Unknown at 1:20 PM
Email ThisBlogThis!Share to TwitterShare to FacebookShare to Pinterest

Fry has visited a refuge for persecuted homosexuals in Uganda on Feb.20