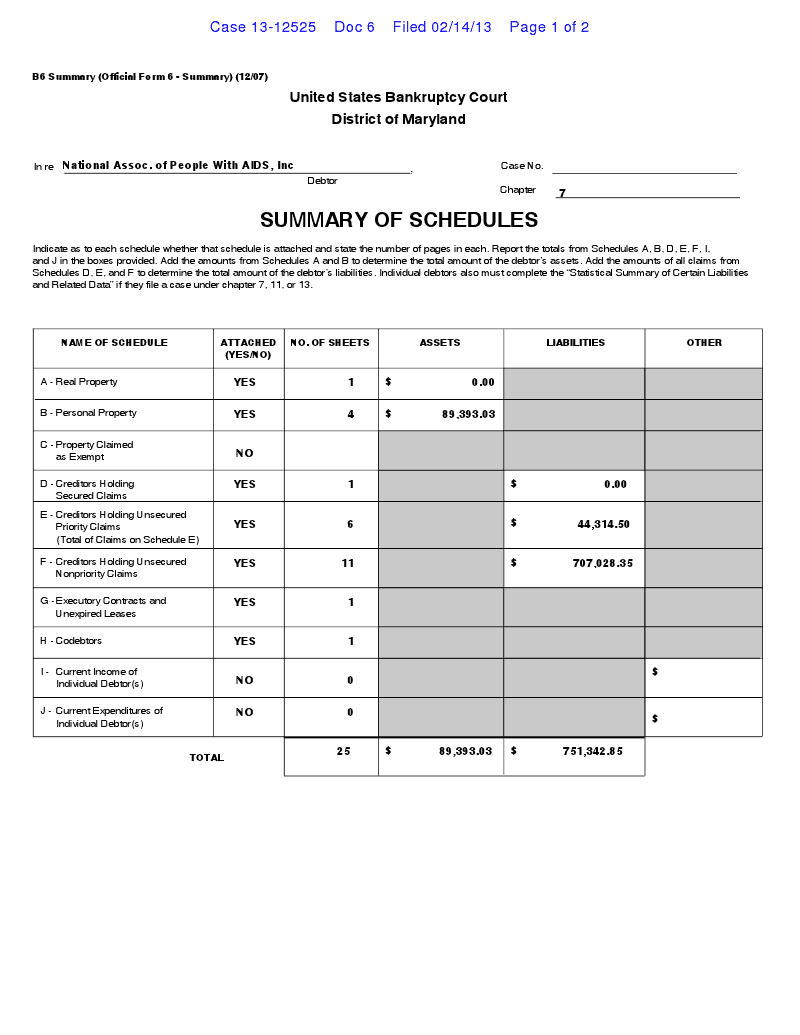 The paperwork filed yesterday by the National Association of People With AIDS declaring bankruptcy have been made available to me by Greg Milward. He's a fabulous AIDS accountability advocate in Madison, WI, who blogs at WisconsinHIV.com, and I thank him for finding and sharing the filings.

To read the NAPWA filings go here, here and here.

Over at the Washington Blade, veteran reporter Lou Chibbaro Jr writes about some of the details in the paperwork:

One source familiar with NAPWA and some of its board members said the bankruptcy filing follows reports late last year that as much as $700,000 in NAPWA funds was either missing or unaccounted for.

According to the source, the discovery that funds were unaccounted for prompted the board to ask the Montgomery County States Attorney’s office to investigate the matter . . .

The bankruptcy filing shows that many of NAPWA’s former employees are listed as creditors who are owed sums of money ranging from several hundred dollars to more than $4,000. NAPWA’s landlord, Brookfield Properties, is owed $75,000 in back rent, according to the bankruptcy filing.

Chibbaro tried to speak with former executives of NAPWA and couldn't reach them for comment. In the coming weeks, I expect more information to be made publicly available about what led to the demise of the group.

Should a new organization be formed to represent the voices and needs of people with HIV and AIDS? Yes, of course, but it should from the start be fully transparent and accountable to the community it wants to represent.

After NAPWA allowing itself to be coopted by the CDC and OraSure and Gilead grants, not to mention misguided influence by AIDS service groups, its biggest problem was a top-down, closed-door approach. Look at where it got them.

AIDS isn't over and there is very much still a need for a responsible and authentic grassroots organization to advocate on behalf of PWAs.
Posted by Unknown at 12:35 PM
Email ThisBlogThis!Share to TwitterShare to FacebookShare to Pinterest

I know and have been in contact with both Frank Oldham, Jr. and Stephen Bailous and neither were contacted by Mr. Chibbaro of the Washington Blade. So if he tried to speak with former executives of NAPWA and couldn't reach them it was because he didn't try...

Great that you're in touch with them. I, and many others, have waited months for them to communicate with us about the NAPWA problems. They don't have to wait for Lou to call them. It's a free web and they could use it to begin a dialog.

I've heard some interesting information you might be able to verify. I have heard about the Maryland State's Attorney investigation but I recently heard that the subject of the investigation, Frank Oldham, has fled the country and is now in Paris France. Is this true?

I heard some interesting news at the US Conference on AIDS. it appears that Frank Oldham has reinvented himself and has been named the Executive Director of the National Medical Association which is the professional organization for African American doctors. guess he practiced stealing money from people with AIDS and now he is going for the bigger bucks.