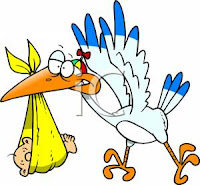 Shocker! Berkeley's Medical Marijuana
Doesn't Fall From the Sky
This news from the Daily Cal campus paper over the weekend is sending shock waves across the region, due to revelations from a gay member of the Berkeley City Council, Mr. Kriss Worthington. There is no fantasy stork flying over the city, dropping cannabis medicine down for the masses.

The production and cultivation of medical marijuana is just one issue among many that needs to be addressed in the near future because of the vagueness of Prop 215, which allowed for dispensing medical pot. Legalizing and regulating pot, which should happen at the ballot box this November, will be a giant leap forward for those of us who would choose pot as a means toward the pursuit of happiness and other benefits.

I don't know what's happening with San Francisco's cannabis task force, but if it's active and holding public meetings, it should look into how the commission across the bay is going to resolve one of its cultivation problem in the next few weeks.

From the Daily Cal article:

Berkeley's Medical Cannabis Commission is aiming to clarify an ambiguous city ordinance with a proposal to explicitly allow collectives to supply marijuana to local dispensaries.

According to [...] Worthington, as it stands now, it seems like "cannabis magically falls from the sky" into local dispensaries.

"We want to address the issue of how medical marijuana gets to the dispensary to be given out," Worthington said. "We want to know where it is cultivated and how it travels." [...]

Currently, the city does not allow for more than three dispensaries, but the number of collectives is not capped. [...]

Worthington said the proposal [to clear up cultivation confusion] does not seek to increase the number of collectives in the city.

The commission's proposal is scheduled to go before the City Council for approval April 27 and, if adopted, will go into effect six weeks later

Posted by Unknown at 3:06 PM
Email ThisBlogThis!Share to TwitterShare to FacebookShare to Pinterest