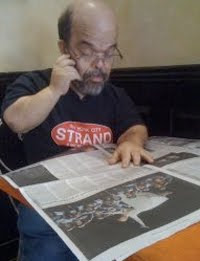 Harry Weider Killed in NYC Accident;
Gay, Jew, Dwarf, Leftie was 57
As I write this, my eyes are cloudy with tears, over the loss of my friend Harry Weider. He was killed last night in Manhattan.

I met Harry back in the day at ACT UP meetings and many times, he would bark at me: "Petrelis, get on your knees and hug me." He was physically small, and said his size deprived him of affection big people get all the time without a second thought. But for Harry, you'd either have to bend over to embrace him, kneel down to do so.

In November 2008, when my partner Mike took us to NYC and New Jersey to see family and pals, we ran into Harry in the lobby of the Public Theatre on Lafayette Street. One must climb 5-6 steps from the entrance to reach the elevated lobby, and I was standing up there, when I saw Harry amble his body and crutches through the door.

He began his routine and I joined him at his side. He cracked a smile seeing me, curious to know what play I was going to. Before answering, I demanded a hug from Harry on the stairs, which he of course gave me, then made it to the top.

Once there, I said, "You know, that is probably the first time I didn't have to get on my knees to share a hug with you." We both chuckled, my Mikey soon showed up, and without any prodding, got down on his knees and hugged Harry. It was the last time I saw my friend.

Life is unfair and Harry was dealt some not-so-kind cards, but damn, he didn't let a thing stop him from leading a full and happy life. It's really rotten Harry was taken from us like this.

Harry, rest in piece, my friend. You were loved.

Here's the sad email announcement I received a short while ago:

We unfortunately have some sad news to report this morning. Well-known community activist Harry Wieder was killed last night, after a taxi struck him as he was leaving CB3’s monthly meeting at P.S. 20. Wieder had been trying to cross Essex Street when the accident happened. Emergency crews arrived on the scene almost immediately and transported Wieder to Bellevue Hospital, but attempts to resuscitate him failed.

Wieder was a longtime member of Community Board 3, as well as an activist for gay rights and the rights of the disabled. In an email message, CB3 Chair Dominic Pisciotta said, “I will miss Harry terribly. He contributed so much to the Board and you could always count on him being at nearly every meeting. He loved serving the community and most of all fighting for it.”

Community board members rushed into the street moments after the accident, and several of them went to Bellevue to be by Wieder’s side.

On Wieder’s Facebook Page, he described himself as a: “Disabled, gay, Jewish, leftist, middle aged dwarf who ambulates with crutches…” He was a true Lower East Side personality who definitely made his mark. In Betty Adelsen’s 2005 book, “The Lives of Dwarfs: Their Journey from Public Curiosity Toward Social Liberation,” she wrote of Wieder:

He has gained both fame and notoriety. In 1993 New York Newsday columnist Jimmy Breslin wrote a Runyonesque article about Wieder, inventing some details, but capturing his combative, roguish nature and his penchant for truth.”

You can read a longer excerpt from the book here. Funeral and memorial plans are still pending – we’ll let you know when we have that information. CB3 has canceled tonight’s scheduled meeting of the waterfront subcommittee.

Posted by Unknown at 1:45 PM
Email ThisBlogThis!Share to TwitterShare to FacebookShare to Pinterest