Oops: HRC's BAR Ad:
'Lobbied in Support of DADT'
This is no April Fool's Day joke. There is a full-page ad on the back of the Bay Area Reporter's arts-and-sex section from the Human Rights Campaign, and there is a major oops in it. Among the activities HRC has undertaken recently? 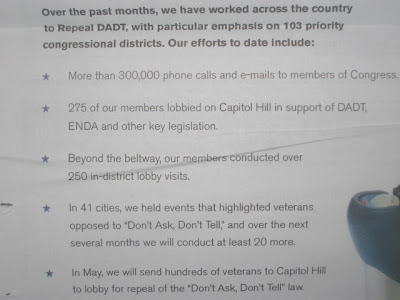 "275 of our members lobbied on Capitol Hill in support of DADT, ENDA and other key legislation."

What HRC meant to say is that their members campaigned against the current Don't Ask Don't Tell policy that bans openly gay people from serving in the military, and in favor of the Employment Non-Discrimination Act.

Can't HRC do anything right? Is there always some telling little mistake, such as one line in an ad, or a big problem like, say, lack of a road map from HRC showing us the way forward to repeal DADT and enact ENDA?

The problems we gays face in Washington include President Obama not delivering on his promise to be our fierce advocate, and as important, our largest gay political org has shown itself to also lack a strong streak of fierce advocacy.

And if HRC is serious about persuading members of the House and Senate to support the overturn of DADT, instead of taking out an ad for gays in San Francisco, HRC should place an ad in Roll Call or The Hill papers in Washington. Tell Congress and other policymakers why the ban must be lifted.

How the hell does it help end DADT to have HRC place an ad in the BAR? This is probably just one piece of HRC's CYA (cover your ass) strategy, to absolve themselves of responsibility in the looming failure regarding DADT.
Posted by Unknown at 3:55 PM
Email ThisBlogThis!Share to TwitterShare to FacebookShare to Pinterest

Amen. The choir, preached to.

HRC is primarily concerned with protecting the cash cow, in order to protect their salaries. Any advocacy is incidental. They place their ads where the donors are. We operate our whole agency on less than they pay one staffer and Joe's salary is obscene.

I was one of the 275 that recently lobbied Congress to repeal DADT. I can certainly tell you that the repeal of DADT was the main focus of our meetings.

HRC has wasted $550 million in 30 years of "lobbying." You cannot win our equality with lobbying because anti-gay positions are based on morality and the majority beliefs of constituents.

$50 million a year would be better spent communicating with our friends, neighbors, co-workers and even strangers. We need people to JOIN US and SUPPORT US. Lobbying politicians doesn't do that.

HRC had 30 years and they never produced any verifiable results. Their jobs are more important that our equality.

Maybe Brian can tell us how many Members of Congress have changed their minds/votes during the last 30 years of HRC-lobbying.

I've spent money on research that consistently indicates "zero" minds/votes changed in our favor. That's the problem with lobbying - anti-gay positions are non-negotiable.

We've lobbied Senator Robert Byrd for 58 years - with no success. The problem? He's a Baptist and his constituents are still 67% anti-gay. You can lobby all you want, his vote is not changeable. He's even a Democrat, but he remains anti-gay.

Spend your time making a real difference - lobby your friends, neighbors, co-workers and even strangers. We need people to join us. WE need to do that.