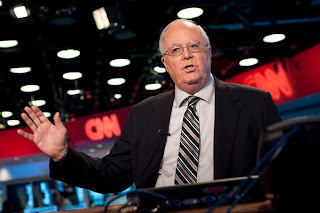 How Much Does Catholic League's
William Donohue Earn?
The executive director of the professional anti-gay and pro-Vatican-at-all-costs Christian org known as the Catholic League, Mr. William Donohue, has not taken a vow of either poverty or living on modest means. He's also quite lacking in compassion for anyone other than corrupt church leaders.

The Catholic League, according to its 2008 IRS 990 tax report, has more than $22 million in assets, so it can easily afford hateful ads on the New York Times' op-ed page. This ran in yesterday's paper (click to enlarge): 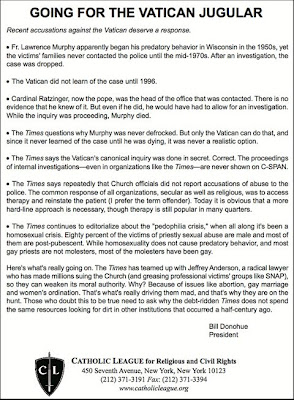 The 2008 tax filing for the org reveals that Donohue's total compensation package was $372,501 (see page 7). That figure, BTW, is a little bit more than 9% of the Catholic League's $4.1 million budget, and I'm not sure it's out of line with good nonprofit practices for executive compensation.

Such pay shows how profitable it is to pimp for the Vatican and to demonize gay men.
Posted by Unknown at 11:00 AM
Email ThisBlogThis!Share to TwitterShare to FacebookShare to Pinterest

You can't go for a jugular. That requires a heart to be present and there is no evidence of a heart at the Vatican.

It also should be pointed out that Donohue is a dovorced man -- and thus barred from taking Holy Communion.

Why is a divorced man seen to be a fit representative of the catholic Church?