Homo History:
Milk's 1976 Rainbow Invitation
The Randy Shilts collection at the San Francisco main library bulges with fascinating pieces of important gay history, which I've been searching through lately, and I've made copies of some paper artifacts I want to share with as wide an audience as possible. Click on the images to enlarge them.

The top item I looked at was an invitation to a fundraiser for Harvey Milk's 1976 campaign for state assembly. It is bordered with a five-color rainbow design, and it stands out because the rainbow flag had not yet been promoted or adopted as a symbol of liberation and visibility. 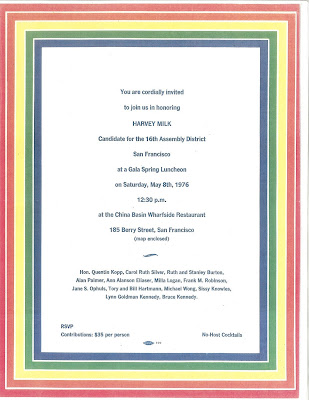 As we all know, Gilbert Baker, the Betsy Ross of the gay movement, created the rainbow flag design, with six colors, and pushed it as a badge of pride at the 1978 San Francisco gay pride parade and rally.

I spoke with Gilbert today, and like me when I first saw the invitation at the library, he was surprised and very pleased to learn of Harvey's use of the rainbow -- two full years before the official debut of his rainbow design.

The image above is a page from the November 1978 SF Gay Vote newsletter, and what is noteworthy about it is the brief article about President Jimmy Carter speaking out against the Briggs Initiative. Compare that brave act so long ago, from a sitting president, with the the inability and refusal of Barack Obama to deplore California's Prop 8 in 2008 and subsequent gay marriage ballot initiatives.

Someone needs to educate the White House about our history from 1978 and the leadership shown by Jimmy Carter on behalf of gays, facing discrimination through the ballot box.

This October 1978 announcement from Harvey's office at City Hall shows us how he wasn't the least bit afraid to make good use of young students in the political process, and to help defeat the Briggs Initiative. Unlike today, when scaredy-cat gay leaders running gay marriage ballot propositions would rather swallow razor blades than openly engage gay youth and kids in campaigns, Harvey worked to engage the students -- and win! 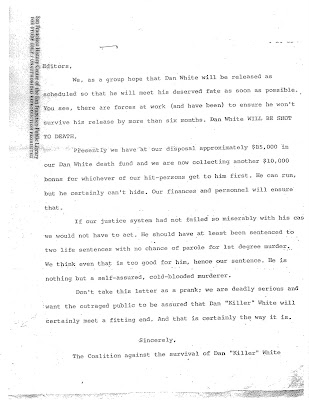 This anonymous letter was addressed to the editors at the San Francisco Chronicle, and illustrates a fraction of the gay community's anger over the assassination of Harvey. There was nothing in Shilts' papers indicating if the newspaper wrote about the threatening letter, or if law enforcement officials were made aware of it or any investigation launched. The letter's promises went unfulfilled. Dan White committed suicide in October 1985.

I don't want to close this post on such a depressing topic as the death of White, so let's return to the beautiful and colorful 1976 invitation. If anyone knows who designed the rainbow border for Harvey's fundraising pitch, please share that information with me and let's give credit to that person.

The invitation's use of the rainbow is another small example of how Harvey and those around him were so ahead of their time.
Posted by Unknown at 11:10 AM
Email ThisBlogThis!Share to TwitterShare to FacebookShare to Pinterest

I was not living in SF when the rainbow border for Harvey's fundraising pitch was printed, but it was common back then for "instant printing" shops to print single color text flyers on colored stock paper that had a pre-printed full color border or background. Back then, doing custom color printing in small quantities was too expensive for a small print job.

Whoever picked out the stock paper had a prescient sense of design!

I gotta guess Jim Rivaldo right? He was doing all of Milk's stuff then.

Oh, if only he'd had time to be the historial advisor to Milk the movie...