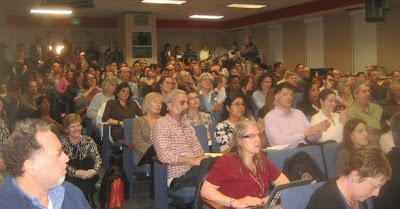 Many components of AIDS Inc gathered on Tuesday night at the Carr auditorium out at SF General Hospital, for a community meeting on a big push for universal treatment of people as soon as they test positive, even if they have high t-cell counts and no active infections. The forum was so packed, some people sat in the aisles or stood at the back of the room, as shown above. 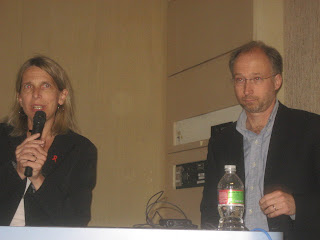 The scientific rationale behind the push for widespread treatment at earlier stages of HIV infection was made by the first two speakers, Dr. Diane Havlir, above left, and Dr. Steven Deeks, above right. Basically, new info from the SMART and NA-ACCORD studies, and other data, show that leaving an HIV positive person untreated, even when they feel great, does more damage to the immune system than side effects from the drugs, according to proponents of the new policy.

One thing that made me sit up was when Havlir talked about resistance to the cocktails. She said that resistance in 2000 was at 28%, and that in 2009 the resistance level fell to 15% and that we can manage the problem. I wasn't sure where the numbers came from, so I emailed her and received this reply:

The percentages [...] represent the % of patients with transmitted HIV drug resistance who are in the Options cohort. The Options cohort started in San Francisco in 1996 and has enrolled over 650 persons acutely or recently infected with HIV. The cohort is led by Dr. Rick Hecht.

All of the presenters mentioned how resistance and adherence are monitored now, and how they will be tracked under the new guidelines. I've never seen Deeks in action, and I was impressed when he said they may be wrong with this new push. Does he always give an honest, down-side look to new ideas? If he does, bravo, and no matter, it was music to my ears to hear a researcher admit they don't have all the answers.

During public comment, I asked that we discuss the resistance issues without the hysteria of UCLA's HIV math modeler Sally Blower. Her research is not the proper foundation for that discussion. No one defended UCLA's math model or Blower during the forum or afterward in smaller chats.

The researchers and presenters were criticized by Dr. Karen Bayle, from the Tom Waddell Clinic of SF DPH, for failing to disclose any grants from Big Pharma. My sunshine heart was pleased with her raising this important issue, but she coupled it with a question, I can't recall about what, and Deeks addressed only the question.

He was about to give up the mic and move on, but I piped up and said, "What about disclosure?" Deeks nodded in affirmation and disclosed his current Big Pharma grants, and soon we had Havlir and all other presenters disclosing their links to the industry. I thanked each person after they disclosed for doing so, even the people who had nothing to disclose. Kudos to Bayle for broaching the topic.

The disclosure issue must always be part of these forums, not because links to Big Pharma necessarily are bad or overtly influencing policy decisions, per se, but simple sunshine principles demand constant revealing of grants and other connections between researchers and drug companies. This forum met the minimal standards for public disclosure and relationships with Big Pharma. 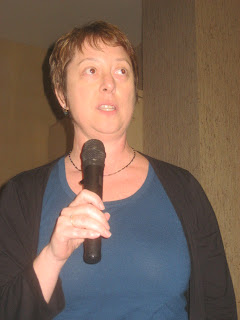 The head of California's Office of AIDS, longtime community activist and openly bisexual Dr. Michelle Roland, facilitated the discussion after the presentations. She received a much-deserved, robust and sustained burst of applause for her hard work last year to save the state's AIDS Drug Assistance Program, and in the process, the lives of many.

Many people with AIDS and our advocates are very grateful for her dedication and negotiating skills, and for balancing the concerns and demands of the AIDS community, against the budgetary and political realities of Sacramento. Good to see her receive public accolades from the community. 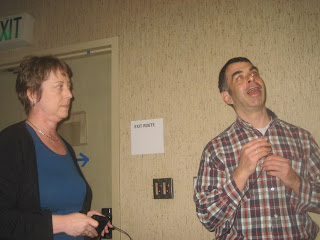 The openly gay head of the SF DPH, Dr. Mitch Katz, above right, was asked a question about funding for the new universal treatment program, including drug cocktails, doctors' visits and blood monitoring tests, and Roland also address the cost factors. Guess what? It's gonna take a lot of community and political muscle to safeguard existing and expanding HIV/AIDS public health programs.

All in all, a good forum, with everyone truly attempting to figure out the best course of action regarding treatment options, regardless of when folks begin cocktails. One thing that was lacking were voices of researchers or doctors advising waiting before newly tested positive persons take drugs.

The evening's presenters were not in the least dismissive of anyone opting to delay treatment according to their own plans, but there was a little too much pushing of everyone getting on the early treatment bandwagon. Contrary voices would have been a welcomed force, making the discussion more rounded.

If the forum organizers needed help finding local AIDS experts on the opposite side of early treatment, they could have found two of them through the New York Times story on April 2 that broke the news about this treatment shift:

But the proposal is highly controversial, even in San Francisco.

“It’s just too risky,” said Dr. Jay Levy, the U.C.S.F. virologist who was among the first to identify the cause of AIDS. The new drugs may be less toxic, Dr. Levy said, but no one knows the effects of taking them for decades. [...]

Although Dr. Capaldini recognizes that today’s drugs are a vast improvement over earlier therapies, the program, she said “is not ready for prime time.”

For another perspective on the forum, check out veteran medical reporter Liz Highleyman's excellent account at the Bay Area Reporter. Highleyman looks at cost and adherence concerns that were an overriding matter for lots of people, among other topics.

Reading her BAR piece made me wish the organizers or someone with tech know-how, had thought to record the evening on video and then post highlights, or the whole enchilada, on the web. Making a tape and sharing it would have broadened the audience for the discussion, an audience beyond San Francisco's borders, that could help poz people and those at-risk of contracting HIV.

If you know of anyone posting a tape from the forum, let me know the link.
Posted by Unknown at 9:47 PM
Email ThisBlogThis!Share to TwitterShare to FacebookShare to Pinterest