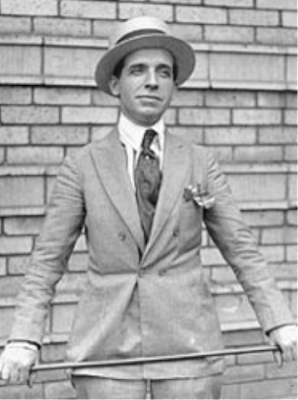 (Charles Ponzi, was quite a dandy dresser in his day; just like Kors and Solmonese today.)
Yes, I know this blog post by SF Weekly's gay writer Patrick Connors, who describes himself as "an uppity fag who is sick of everyone making a buck off his marriage," is one more snark entry against the leading professional gay orgs at the state and federal level and doesn't break new ground, but it's still worthy of attention. Why?

Because it's a shining example of how there are so few gay bloggers, okay, gays in general, who have either EQCA or HRC's back. It's damn near impossible to find pro-EQCA or pro-HRC blog posts, or independent thinkers who proudly back the orgs and their way of operating.

Like Connors, I see no reason to get behind any effort by EQCA or HRC, and there are still many unanswered accountability questions that need to be addressed from the disastrous 2008 campaign on Prop 8, led by EQCA, and HRC's ineffective effort to repeal Don't Ask/Don't Tell.

When will we see Geoff Kors and Joe Solmonese turn into fierce advocates, and their orgs worthy of active support from the gay community? From the SF Weekly:

Yesterday Restore Equality 2010 announced it was abandoning its efforts to repeal Prop 8 on the November ballot. [...]

The repeal plan was debated at length last summer at venues across the state. Lots of people ranted and raved. The California big-name gay rights organization, Equality California (EQCA) kept its tasseled loafers above the fray and announced that it wasn't going to participate in a 2010 repeal effort. Instead, it would get strategic and raise funds and knock on doors to change hearts and minds one by one throughout Orange and Fresno counties in preparation for a 2012 repeal effort.

That sounds nice and prudent but really it reeks of self-preservation. Like the Human Rights Campaign's Joe Solmonese, Geoff Kors from EQCA runs a gay ponzi scheme. Trust them! Invest in the organizations that provide their leaders with fat paychecks and watch the social justice trickle down back to the community. Unfortunately they are gay versions of Bernie Madoff. No on 8 was a multi-million dollar disaster. Why would any sane person support a repeal effort in the hands of EQCA?[...]

Without an acknowledgment that we are facing far too many similarities to 2008 and that tactics must change in 2012, there should not be a reflexive move to join EQCA for a repeal of Prop. 8 in 2012. To do so would only enrich and elevate the organization that failed us bitterly in 2008. We need to take off our white gloves and get serious about exercising our political clout.

Posted by Unknown at 2:18 PM
Email ThisBlogThis!Share to TwitterShare to FacebookShare to Pinterest

Thank you for picking up on the post. I was just going to your blog to ask if you had read my post when I saw that you had.

Excellent. You did inspire my ideas, by the way.

Furthermore, Bilerico also posted the same piece and it has elicited a number of comments - including one from Marc Solomon, Marriage Director at EQCA.

I replied to his comment and I was channelling you. Check it out: http://www.bilerico.com/2010/04/same-sex_marriage_in_2012_thatll_be_the_day.php

(by the way - my name is Patrick Connors.) Thanks again!!

thanks for writing a terrific piece for the sf weekly site. and i apologize for getting your name wrong, mr. connors! i've corrected my mistake.

keep up the great snark. we one day may have gay orgs worthy of all-out support.

Is there any way to find out what the salaries are at EQCA?

You are the expert at exposing these things and I'm pretty new at trying to figure out where to go first.

I'd understand if you don't want to share your methods...but I really wanted to ask anyway.

i'm more than happy to help you find the salaries at EQCA, and want to speak with you about related matters. call me and let's chat: 415-six-two-one-6267.