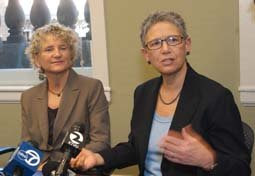 Did Gill Action's Guerriero Kill Lesbian
Prop 8 Ad? Release it Now!
Something's bugging me about a section in Seth Hemmelgarn's excellent wrap-up piece in the current Bay Area Reporter about the February 26 town hall on Prop 8. It's the part about a ready-to-air TV spot with an actual living, breathing and talking lesbian:

One topic that got a strong reaction from the audience was the involvement of campaign consultants. Smith, a principal in Dewey Square, was discussing the decision to air an ad featuring the voice of actor Samuel L. Jackson talking about discrimination, rather than another ad featuring an out lesbian, when co-moderator Kim Corsaro, publisher and editor of the San Francisco Bay Times, asked who made that decision.

Smith said a committee comprised of him and five other consultants had been making decisions at that point in the campaign, just weeks before the election. Kors added that no executive committee members had been present when this happened. There were only two out gay people and one woman in that group, Smith and Kors said.

Asked about the exchange in an e-mail, Kors responded that Patrick Guerriero, who had taken leave from his job at the Gill Action Fund to work as No on 8's campaign director during the month before Election Day, had full decision-making authority for all aspects of the campaign.

"There was a team of consultants involved in creating, testing, and recommending ads to Patrick. The executive committee was not involved in that process" during October and November, wrote Kors in an e-mail.

He added, "Patrick kept the executive committee updated and sought input from a large number of people based on their particular experience and expertise. For example, EQCA was focused primarily on fundraising and creating the fundraising e-mails."

Kors also wrote, "The executive committee was not making the day-to-day decisions. We were the legal board of the campaign." ...

There are several ways to read this. First, Kors is attempting to shift the focus off of campaign leadership, if you can call it that, and instead question the decisions that were made by Guerriero. Nothing wrong with this really, and we should be looking at the vital role Guerriero played in the campaign.

Second, did Guerriero, and by extension the Gill Action Fund, which was paying his salary, I believe, make the decision to withhold the lesbian ad?

Thirdly, I am calling on the remnants of the executive committee and their hired consultants to release this ad. Gay community dollars were raised and spent on it, and even though it never saw the light of a TV screen or was shared on YouTube, we have a moral right to view it finally. If for no other important reasons than gay visibility and the homo-historical record, let us see the lesbian ad that was taped didn't get broadcast. Now.

Fourth, I believe Guerriero owes the San Francisco gay community a town hall to answer questions about his decisions in the campaign, if only to help us gain a fuller understanding of the operation he oversaw, share his lessoned learned with the affected gay population, and do all he can to guarantee the mistakes made in 2008 are never repeated.

While I and other bloggers and critics of the No on 8 campaign have shot much well-deserved criticism at the likes of Kors, Kate Kendell and Lori Jean, we have not focused nearly enough attention on what Guerriero did in the last weeks of the campaign, when the reins were handed to him and a miracle was expected.

It's vital that we hear and see Guerriero respond to these and many other concerns still lingering over the community like a cloud of doom from the Prop 8 campaign.

As far as I know, he was the moderator at one public meeting in LA in November after the loss, but otherwise has kept mum and out of the limelight.

Hey, Patrick, do the movement a favor. Agree to hold a few open forums in California in the very near future. We need to learn from the good decisions you made and the not-so-good.

Here's an excerpt from the BAR story by Cynthia Laird in November that first reported on the lesbian ad:

The No on Prop 8 campaign made a television ad that featured a lesbian talking about marriage but the commercial never aired, the Bay Area Reporter has learned.

Kate Kendell and Geoff Kors, members of the No on 8 executive committee, confirmed during an interview Monday, November 10 that such an ad was made and that it was not shown on television because the campaign had to counter the Yes on 8 ads that said children would be taught about same-sex marriage in schools. ...

Kendell said that the unaired ad featured local lesbian Jeanne Rizzo, who was a party to the successful lawsuit that overturned the state's anti-gay marriage laws.

Rizzo and her partner Pali Cooper were one of a handful of couples who were turned away by county clerks in March 2004 minutes after the state Supreme Court ordered same-sex marriages halted.

Rizzo, a registered nurse and executive director of the Breast Cancer Fund, told the B.A.R. Wednesday in a phone interview that she was happy to help the No on 8 campaign by appearing in the ad. She said that the ad was made by Ogilvy Public Relations and taped in her home. In the 30-second spot, she said the core message was: "You've heard domestic partnerships are similar to marriage. I'm here to tell you it's not. My partner and I got married after 20 years together." The ad closed with her saying that she's 62 years old, a nurse, an American, "and I should have the same rights." ...

(If I ever had a shot at getting a grant from the Gill Action Fund, this post surely will kill the chance of receiving funds from this important foundation. But, dammit, someone has got to start asking the fund's executives who took over Prop 8 at the end to be accountable, at least to San Francisco gays.)

I was wondering why Patrick Guerriero's name has not been brought up heretofore with respect to the No on 8 campaign failure. I was furious back in November when I first learned about Guerriero's leadership role in the No on 8 campaign: Guerriero at the helm to fight for GLBT rights? The same guy who headed the laughable Log Cabin Republicans and made such monumentally disgusting decisions such as backing Bush -- in spite of Bush' public hatred and vilification of LGBT Americans? And THIS is the guy who was making key campaign decisions in a fight for LGBT rights? And is it any surprise Guerriero would be part of the decision-making process to squelch the airing of a lesbian-focused ad? I mean, really, for all practical purposes, the Log Cabin Republicans is a nearly 100% all white, all gay male boys club which Guerriero presided over. So it should come as no surprise to anyone that Guerriero's team would nix the female imagery from any anti-prop 8 ads.

patrick has done lots more than just serve as head of the log cabin group. he walked into a mess, and i mean a MESS of a campaign in the fall and tried to salvage what good he could at that late point.

it says more about geoff kors and his crew of the executive committee that patrick, or anyone will real campaign skills, was brought in so late in the losing game.

i'm hopeful patrick will not only help get the lesbian ad released, but also give us more insight into his role in the campaign.

This anti-H8 ad, featuring actual lesbians, did get aired, albeit at the last minute:

The other side was outraged! Name one No on 8 ad that drew a response bordering on outrage.

that courage campaign ad was good, but so much more visibility and education about us would have been achieved if EQCA/No on 8 had spent even a million or two of their $45 million on ads featuring actual gay people.

Guerriero picked a lousy time to lose his first election.