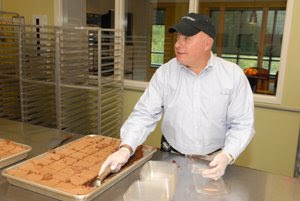 $357K DC HIV Executive Gets $25,000 Bonus
A little bird in Washington sang an anger-inducing song to me this morning, all about Craig Shniderman, the executive director of the hot meals Food and Friends AIDS service organization, receiving a $25,000 bonus since he faced brutal criticism last year over his $357, 447 salary.

Here's the scoop. The Washington Blade, which has extensively covered Schniderman's pay and the cuts in services at Food and Friends with accuracy and balance, will report on its front-page tomorrow that this avaricious AIDS leader got a nice five-figure bonus recently. The story will also be on the paper's web site.

Given the extreme reactions of donors, clients and accountability activists upon learning of his $357,447 pay last summer, how the heck could the board of Shniderman's agency even think of giving the man a bonus, and in this economy too, not to mention the American public's anger over bonuses to corrupt Big Banking executives? What the eff was going through the minds of Food and Friends' board members when they decided to fork over $25,000 on top of his salary?

I was convinced upon learning of Shniderman's greed last year that the man lacks any shred of decency. Today's news shows me his board is as shameless and out of touch with reality as the top guys at AIG.

How will the local community react tomorrow when the Blade story is published? I've followed the Blade articles on the deep financial troubles besetting the Whitman Walker Clinic, leading to staff cuts, closures of facilities and curbs on services to people with AIDS, which have raised the concern of many gay and AIDS activists. My gut tells me the activists are going to be upset and demanding changes from Food and Friends.

If the board of Food and Friends simply had to write a bonus check of $25,000 to their greedy leader because the money couldn't be spent on something like, oh, organic bananas or protein drinks for persons with HIV, they should hold a town hall to explain why Schniderman deserved the extra bucks.

Frankly, I would rather see that money given to the Whitman Walker Clinic and earmarked for direct services to clients. That $25,000 should be spent on helping people with AIDS stay healthy and alive, not on one AIDS executive with no shame.

CORRECTION: The $25,000 is not a bonus. It is a raise on Shniderman's old salary level.

Posted by Unknown at 11:15 AM
Email ThisBlogThis!Share to TwitterShare to FacebookShare to Pinterest

Were there hidden bonuses in there somewhere?

the 357K figure is in the 2008 tax filing, which food and friends sent to me via email. they share via email the latest 990 with anyone who asks. the 990s on the guidestar.org site are a year behind.