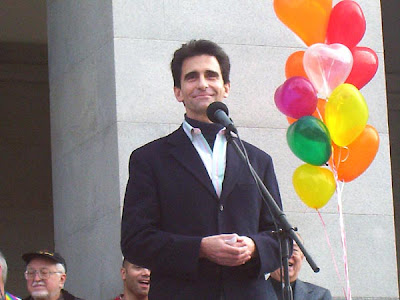 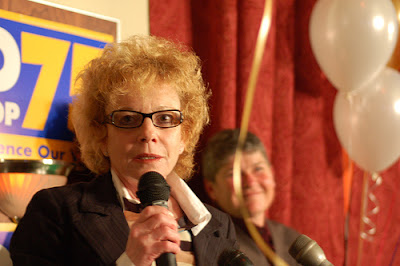 I take it as a sign of community-wide maturity and political advancement that San Francisco will soon see a gay Democrat versus another gay Democrat for the same office.
One aspect of not just gay politics, but much of American races, is that there can only be one chosen candidate most if not all of the community is supposed to rally behind. Too often in San Franciscan races we see local and state seats declared by different political machines to be the domain of the machine-annointed candidate. Competition is anathema for our local machines.
All that aside, the SF Examiner today reports gay Democrat Mark Leno has formally announced he will challenge incumbent gay Democrat Carole Migden for her state senate seat.
From the Ex:

Setting up a showdown that political pundits say will split San Francisco’s gay voters and liberal political circles, Assemblyman Mark Leno confirmed Friday that he will challenge state Sen. Carole Migden for her job next year.

Both politicians have previously served on San Francisco’s Board of Supervisors. Both are Democrats; both are openly gay.

Talk about Leno entering the race began several months ago, when word got out that he was conducting polls in the district, which comprises the eastern half of San Francisco, all of Marin County, and portions of Sonoma County.

Migden, speaking through her spokeswoman, Tracy Fairchild, said she was “proud of my effectiveness in the job my district elected me to do — and terribly sorry that the gentleman doesn’t have his own job.”

Political analyst David Latterman said he expected the race to become a battle of personalities that would split political “clubs, endorsements and cliques.”

“Everybody’s talking about the LGBT [lesbian, gay, bisexual and transgender] bloodbath that’s going to happen,” said Latterman, who added that members of the Board of Supervisors who are usually allied are also split in their allegiances to the two politicians. [...]

Leno said he was confident his record as a legislator and a community advocate would win over voters next year.

“With the district aspect of the job, I’ve demonstrated my interest in being in the community — working shoulder to shoulder with constituents,” Leno said. [...]

Have no idea who this consultant Latterman is, but he is seriously wrong about this race being a bloodbath. He may want such a thing, better for his business and all, but I believe we're capable in San Francisco of having two gay Democrats challenge each other, without blood being spilled on the streets of Castro.

Posted by Unknown at 5:01 PM
Email ThisBlogThis!Share to TwitterShare to FacebookShare to Pinterest