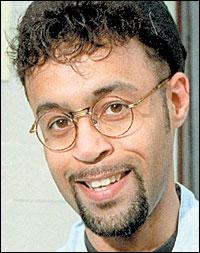 
There's tragic news coming from Philly today. Mark Norris, the head of the ad agency behind the controversial HIV prevention social marketing campaign "Have You Been Hit?", featuring young black men in the cross hairs of a sniper's rifle, was gunned down earlier this week. His brother and a business partner were also murdered, perhaps over a financial deal gone bad.

Even though I strongly objected to the offensive ads and deplored the company that created them, with public dollars from the Philly health department, I am of course deeply saddened that Norris' life has ended so violently.

Two lessons I take away from this story is there are simply too many guns on our streets and weapons are not the answer to resolving differences.

Mark David Norris, who was killed Monday in the boardroom of his Navy Yard marketing company, was an entrepreneur who projected a stylish image and the sense that he had an inside line on the next big business trend. [...]

Others say there were clues that Norris, 46, of Pilesgrove, N.J., the president and chief executive of Zigzag Net Inc., may have operated several businesses too close to the margins. Police say Norris, his brother and a business partner were killed by an investor who claimed they had defrauded him.

According to public records, state and federal tax agencies have filed liens against Zigzag for nearly $180,000 in back taxes and unemployment compensation.

And some who knew Norris said his business deals often seemed fragile.

"He always played very close to the edge," said John Serpentelli, 42, an animation artist who was Norris' romantic partner for seven years. "He was very charismatic and convincing." [...]

Police said Vincent J. Dortch, 44, of Newark, Del., gunned down Norris and his brother Robert E. Norris, and their business partner James M. Reif Jr., over allegations that they had misspent his investment on an Upstate New York conference center they were rebuilding.

The eldest of four brothers, Mark Norris went to school at the U.S. Merchant Marine Academy in Kings Point, N.Y. He dropped out in his freshman year, early in 1979, and enlisted in the Marine Corps. He came to Philadelphia as a Marine recruiter. After his discharge, the self-taught artist began producing and selling paintings to galleries, Serpentelli said. From the art world, he migrated into marketing. [...]

"The man was talented," said Mark Segal, publisher of the Philadelphia Gay News, who met Norris after the artist fashioned a new logo for Philadelphia International Airport, where Segal is on the board of directors.

Though he acknowledged to friends that he was gay, Norris did not trumpet his orientation because he said it could be bad for business, Serpentelli said.

Two years ago, Norris and another man moved into a two-story stucco house in the Thoroughbred Homes development in Pilesgrove, a village in Salem County. [...]

But a $236,000 HIV-AIDS campaign Norris designed last year for the Philadelphia Department of Public Health that equated high-risk sexual behavior to gun violence was criticized by gay, African American and AIDS activists, who called it insensitive. In response to the uproar, the city pulled the plug on the campaign.

Click here to read the full Inky piece. And this is one of the images from the controversial HIV prevention campaign Norris created last year. 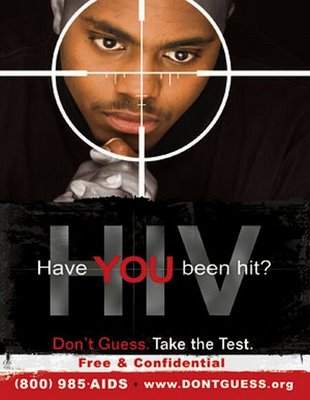 Posted by Unknown at 9:39 AM
Email ThisBlogThis!Share to TwitterShare to FacebookShare to Pinterest

I'm sorry but there are not "too many guns on the streets" but yes, guns are not the solution to all disagreements. There are too many people out there with guns who are uneducated or ignorant of how and when to use them properly.

One could easily say there are too many gays on the streets spreading HIV almost as if opening fire with a viral machine gun, hence the creation of Mr. Norris' ad campaign.

As a gay man living in Atlanta with HIV, I know all too well the ignorance and wanton disrespect many people have for protecting their potential partners. I have disassociated myself from friends who knowingly have unprotected sex while positive and do not disclose to their multiple partners, and those who advertise on their profiles that they are negative when they are not.

If it weren't a gun, it would have been something else that was used to exact that murderer's rage, hate and anger on Mr. Norris. He may have waited and stalked the man and run him over, or stabbed him with a knife, or broke into his house to strangle him...the point being the man was in rage and happened to have a gun and used that gun. As sad as that is, and as wrong as that crime is, I do not want my access to firearms limited because of idiots.

In fact, speaking of idiots with guns... that man in the White House right now should have very limited access to guns, bombs, soldiers and any type of WMD, and start focusing on the rights of gays all over America, and stop trying to fight his Holy War here at home and over seas.

Anyway...I digress, people need to stop being so stupid and ignorant.

I'll start with the last sentence in the previous comment - "people need to stop being so stupid and ignorant."

I am an HIV-positive, gay schoolteacher living and working in Washington, DC. I had an 8-year-old student bring an unlicensed, unregistered firearm to school to show to friends. He found it on the floor of his apartment building.

There are too many guns. No one needs guns. If you need some meat, run at the meat counter with your shopping cart and you can knock down bunches of it that have already even been field dressed for you.

If you actually believe that we need guns to protect ourselves from the government, tyranny, terrorism, etc. you need to put the pipe down honey. We have the most crooked dipshit in the world in office right now and he's blasting away at our civil rights by the barrelfull. And are we as a nation doing anything about it? No. Not really.

I agree in part with Not Mr. Heston. He has every right to he horrified at the prevalence of guns, and his take on the crook in the White House is terrifyingly real. Still, given all they already can stack up against the individual, a gun in hand does no one any good, and it never has; just look at Waco. That's the sad part of it. If I thought it would help, I'd have a gun. Votes do no good either as long as they have been shown to have hacked the paperless Diebold machines.

Thanks for the reporting. Looking forward to more. You are a trusted name in gay journalism. Glad you are out there for us.

I thank you for your reporting on the death of Mark Norris. I had the pleasure of meeting him back in 2002 at a corporate training class. I would have to say he was ambitious and charismatic. Whatever the circumstances were surrounding this tragedy, he certainly deserved more recognition, much more than he received in the pathetic piece of pseudo-journalism you can find here:
http://www.philly.com/inquirer/special/violence/20070214_Investors_plans_ruined_by_flood.html
I had lost touch with Mark over the past couple of years and just read that and your article within the past hour. Once again, thank you, and keep fighting.