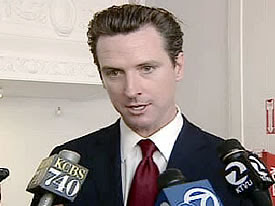 Guardian: Blogger, Not SF Chronicle, Exposes Mayor Newsom's Rehab Gets Govt Grants
Very kind of the Bay Guardian reporter G.W. Schultz in his article today to give me credit for poking a hole in the Chronicle's reporting that Delancey Street rehab does not receive government grants.
From the Guardian:

The San Francisco Chronicle’s intrepid reporters have insisted repeatedly in recent weeks that the Delancey Street Foundation accepts absolutely no government funds. “Instead, it relies on donations and the profits from its commercial enterprises,” San Francisco’s paper of record wrote on Feb. 6.

The Department of Children, Youth & Their Families gave Delancey Street $98,000 in program grants for each of the last two fiscal years and by the end of 2007 will have given the nonprofit more than $300,000.

The city has paid the foundation more than $200,000 so far this year, and there’s another $64,000 in outstanding payments. The Guardian obtained copies of the grant agreements through sunshine requests made last week.

Mayor Newsom is receiving type of counseling for a self-diagnosed excessive love of white wine from Delancey Street’s politically well-connected executive director, Mimi Silbert, who has known Newsom and his family for years.

After local blogger Michael Petrelis began contesting the claims, a Chronicle reporter clarified for Petrelis following a call to Silbert that grant money from the city supports a charter school on Treasure Island called the Life Learning Academy. The academy is managed by Delancey Street and targets troublesome teens – half of them on probation – who have had problems elsewhere in the school district. Silbert told us that the school was designed in part to emulate Delancey Street by operating businesses like its organic produce subscription service and bike maintenance shop. [...]

Thanks for the mention, Bay Guardian. To read my previous posts on this, click here and here.

Posted by Unknown at 10:36 AM
Email ThisBlogThis!Share to TwitterShare to FacebookShare to Pinterest
Labels: accountability, Nonprofits