DC Blogger Slams HRC, Solmonese in Report on the State of Movement Forum 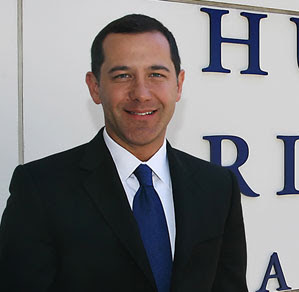 (HRC Honcho Joe Solmonese, A Man Without a Blog)

A forum on the state of the gay movement was held last night in Washington, DC, cosponsored by Metro Weekly and the National Gay and Lesbian Journalists Association and moderated by the former's editor Sean Bugg.
The event took place at the offices of the Human Rights Campaign and the group's executive director, Joe Solmonese, was on the panel, but you'd never know any of this if you depended upon the HRC web site for info on it. Cruise on over to HRC's site and you won't find anything on the panel, the fact it was held at their HQ, and that it attracted a good turnout.
My guess is that because HRC was not in charge of the forum and it wasn't one of their rubber-chicken dinners, meaning they couldn't make big money off it, there was no reason to promote it.
Here's a roundup from a few bloggers who were at the forum, offering their views on how it all went.
From moderator Bugg's blog:

Anyway, as to the State of the Movement, I thought the panel went well. It's never easy to corral eight panelists and about 100 audience members into an engaging and productive discussion, but overall I think we got some interesting stuff covered. Despite my warnings and admonitions about time, I probably should have cut people off sooner. I generally erred on the side of letting people have their say, at the cost of not being able to get to every person who wanted to ask a question.

My general impression of the panel discussions was that there is still a lot of optimism and enthusiasm in movement leaders today, but the people not presented in this panel are those who are making great change on the local level. There were a few exceptions to this in the audience, as in the case of Midge Potts from Springfield, Missourri, a 37 year-old transgender social justice activist who ran for congress in SW Missouri's August 8th Republican Primary. Midge stood up to say how she campaigned door-to-door to farmers and everyday families in SW Missouri on the platforms of direct democracy, debt free America (yeah!), and energy independence.

She sounds like someone I would have voted for, but she lost. She mentioned that in meeting people as she campaigned the prejudices "melted from their faces" as she said. She was doing the footwork that really needs to be done by everyone - shaking hands, telling their stories, and making connections with people who otherwise wouldn't meet any of us urban ghetto G/L/Bi/Trans/Whatevers.

But for the best analysis on the meeting and one panelist in particular, as far as I can see from across the country here in San Francisco, comes from The Scientist's View blog. This blogger deservedly zings Solmonese and HRC, and the zinging is so good, I've excerpted lengthy parts of it:

Dear Joe Solmonese deigned to sit on the panel tonight. And he was pedantic. His whole spiel could be embodied in this summation: "You just don't understand how things work." [...]

Joe is a political animal. As the head of HRC, he doesn't have time to explain why grass-roots approaches are so slow, sloppy and ineffective. He can just tell you that it is, he'll then do a stage voice sigh, and pick at some imaginary lint on his Gucci sleeve. Condescension dripped from his every pronouncement.

To Joe, low level politics are passe. Blogs are distracting (quote). Local efforts are notable, not as a means but soley as a humble example, but ultimately, small potatoes. The only thing that matters is the House and the Senate. 535 people are his audience. The rest of us, the unwashed gay masses, are just sheep and we ought to just write our checks and shut the fuck up. He will decide what we need and our job is to genuflect towards the onerous burden that he has in spending our contributions.

What Joe likes about the corporations is that they come to Joe to ask what they should do to enhance their gay benefits. And then Joe can get a contribution from the corporation to the HRC for his "expertise". Jesse Jackson and Al Sharpton do the same thing - it is just a shakedown.

Kids - it is all about the bucks. The gaping maw of the HRC beehive needs funds - and Joe will whore the homos to get it. And tonight, alot of the gay sheep saw that. HRC is top-down. I find it sad that HRC has taken the the position that gay rights has "matured" to the point of being one more lobby. Direct action, local action, grass roots action are all cute in Joe's eyes. Look at the cute gays protesting. Its so 1970s. [...]

This rant is purely to illustrate that our largest organization oriented towards gay rights is calcified and indignant. HRC deserves not one dime of our money. For HRC has positioned itself to tell us what is important and how it will unilaterally decide what is important.

Aside from the corporate whore plea, Joe's other contribution was that "we" need a few victories to get some wind in our sails. No Joe, you need some victories. [...]
HRC has drifted so far from this as to be unrecognizable as a gay rights organization and now has every feature of a lobbying. We win our rights by living our lives and sharing our experience with our neighbors. And we expect our gay donations to facilitate change at that level. It is only fair - we are not giving the HRC money to swill drinks with Congressmen in the hopes of getting gay marriage to pass.

Boycott the HRC. Just like a corporation, when the dollars stop flowing, the rhetoric will change. Simple economics. We homos should control the HRC, some Gucci whore should not control us. [...]

More about the other speakers later - I gotta get up early tomorrow and earn some bucks. I can't suck corporate donor dick like Joe does to pay the bills. This gay bitch actually has to produce something to earn a check. Odds are that you other gay folk have to do the same as well. Demand more and expect more. It is time for the HRC to get some tough love.

Something tells me this blogger won't be invited to speak any time soon at an HRC dinner, but I'll sure be checking out his blog regularly for more truth-telling.
Posted by Unknown at 12:27 PM
Email ThisBlogThis!Share to TwitterShare to FacebookShare to Pinterest
Labels: bloggers, Gay movement, Joe Solmonese