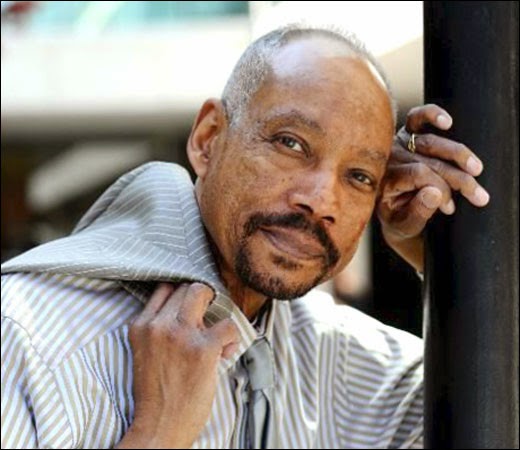 Long before the National Association of People With AIDS declared bankruptcy in February 2013 and ceased to exist, it lost its focus on individuals living with HIV/AIDS and was in no way a genuine community-based organization.

The CDC, in response to a Freedom of Information Act request I made shortly after the group's collapse, has released a 500-plus page audit of NAPWA and it's not a pretty picture. I've posted the audit here for all to read.

By the way, the last NAPWA executive director, Frank Oldham, now works at the National Medical Association in Silver Spring, MD. The nonprofit is dedicated to the health needs of African-Americans. I reached him on the phone last week to get his thoughts about the audit and he promised he'd get back to me by the end of the week, after speaking with his lawyer. Unfortunately, Oldham didn't call or email me.

Reporter Duncan Osborne is a longtime watchdog of AIDS nonprofits for Gay City News and friend who I asked to review the audit and here are his observations: 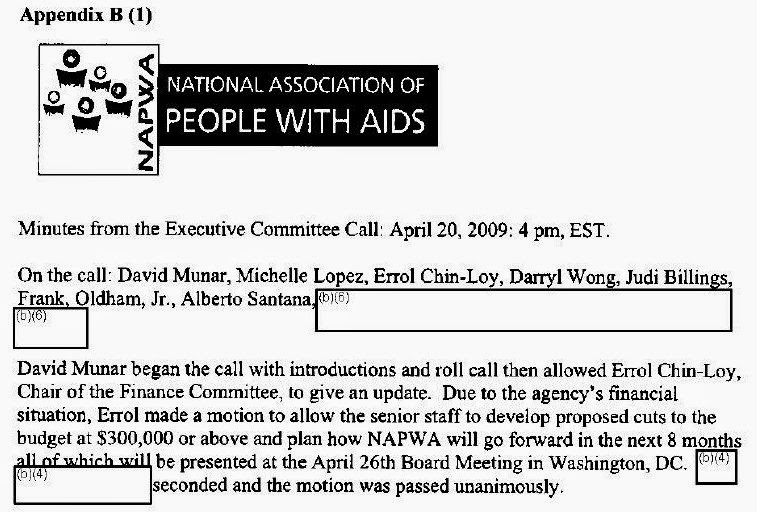 Osborne: See page 131, pictured, for the minutes of an April 20, 2009 meeting of the executive committee of the board. They approved a cut in the NAPWA budget of at least $300,000 so the agency was already in trouble then.

Go to pages 304 to 308 to see documentation on the lack of progress for this capacity building contract. They appear to be falling short on many substantive measures due to lack of staffing among other reasons.

On 309, they're late reporting results by about two months. On 317, they are promising to correct flaws in their earlier reporting.

Osborne: See page 433, pictured. Half of NAPWA's cash was coming from the feds in 2008. That is up from 43 percent in 2007. This reliance on federal dollars means the minute the feds cut you, you're in trouble. Fed contracts were down to 42 percent in 2009. And down to 41 percent in 2010. These percentages weren't declining because NAPWA was replacing that money with private cash. They were declining because the feds were cutting the contracts and the agency WASN'T replacing those dollars.

MP: These lines are evidence of how the group was not first and foremost committed to representing people with AIDS: "NAPWA is a nonprofit organization, dedicated to halting the spread of HIV through serving people impacted by the disease and the community-based organizations which assist them. NAPWA provides a wide-range of HIV/AIDS services which include development of effective and far-reaching HIV prevention education messages."

What the hell NAPWA doing making prevention its number one priority when the PWA part of its name were already infected with HIV? The answer is keeping the CDC prevention dollars flowing and in the final years of its existence receiving grants from the Ora-Sure to promote HIV testing. Their constituency was supposed to be poz folks, not negative people in need of prevention of services.

Osborne: See page 479, pictured, as well. NAPWA refinanced its bank debt in 2010. They were losing money and borrowing on their line of credit, I presume, to pay expenses and payroll. Page 479 has a discussion of their "sustainability plan." Page 481 suggests they were having trouble paying payroll taxes. The last 20 pages or so suggest was NAPWA being monitored, but had not done anything sneaky. It looks like they weren't paying their bills and I suspect that includes payroll taxes. You should check for state and fed tax liens. This looks like a classic mistake -- too much reliance on government dollars leading to failure when those government bucks get cut.

MP: I am waiting to hear back from the Silver Spring and Maryland state attorneys general offices about their investigation into the demise of NAPWA. Stay tuned for updates.
Posted by Unknown at 11:53 AM
Email ThisBlogThis!Share to TwitterShare to FacebookShare to Pinterest
Labels: AIDS, audits, Centers for Disease Control and Prevention, Frank Oldham, HIV, NAPWA

Frank Oldham has landed at another 501(c)3 that does not believe in transparency. No financials on their website----at least that I could find. A check of guidestar shows that the National Medical Association lost close to $1,000,000 in 2011 and 2012.

Why is this level of incompetence continually rewarded?