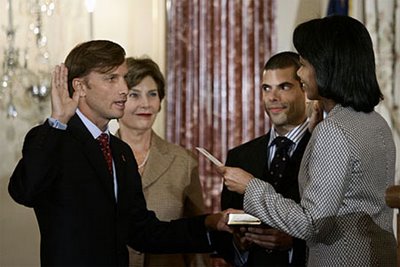 
The United States' global coordinator for AIDS, Ambassador Mark Dybul of the State Department, the openly gay man who brought his male partner Jason Claire to his recent swearing-in ceremony, at which both Secretary Condoleezza Rice and First Lady Laura Bush made glowing mention of his partner's mom as Dybul's mother-in-law, held an "Ask The White House" online chat on World AIDS Day.

He pretty much did what all Bush appointees do during such chats -- tout the administration's policies as good and working to improve the world.

What I found somewhat surprising was Dybul twice citing falling or stable HIV infection rates in resource-poor developing nations, but never said anything about America's failure to achieve similar declines in new infections.

Despite billions spent by the CDC in America, a resource-rich fully developed country, the HIV infection rate here has remained steady for about a decade, at 40,000 new infections annually. Over the past ten years, CDC officials have sounded loud alarms about alleged surges in domestic infections, giving some credence to the claim that infections are not really stable in the USA, but increasing.

Dybul did not address how nations with illiterate and uneducated populations, and lacking the many technological and informational tools available in abundance across America, can see their HIV infection drop, while in the USA HIV numbers climb or remain fixed. However, he should address this puzzling discrepancy between America's HIV rate and comparable rates in under-developed nations.

Something else Dybul might reference in the future is the anomaly of one USA city with a falling HIV infection rate -- San Francisco, of course -- while the rest of the country is not seeing similar drops.

Just in case no one has informed Dybul of San Francisco's latest HIV/AIDS epi report and data, and the good news contained therein, here it is in an excerpt from the SF DPH's latest annual surveillance summary:

The current HIV/AIDS epidemic is characterized by no apparent increases in HIV infection rates over the past five years, and with considerable decreases in some populations.

These are the pertinent excerpts from Dybul's online chat on December 1:

Q: Dear Ambassador Dybul: there are many who believe condoms are the best way to combat aids and many, like the Vatican, that believe condoms send the wrong signal--how does the administration deal with such conflicting views? Especially in the case of Africa? Thank you.

A: [...] We are starting to see significant declines in HIV rates in several countries and stabilization of infection in others. [...]


Q: Ambassador Dybul, Will you please take a few moments to put the Global AIDS epidemic in proper persepctive? Even today there seems to be a strong sentiment that this disease affects mainly drug users, low income persons, and third (fourth) world countries. Is it possible for you to provide a statistical break down of whom this disease affects and its costs to society as a whole on an per annum basis or at least provide a website reference.

A: [...] As I mentioned in the previous answer, new evidence shows that in additional nations in Africa and the Caribbean, people have changed their behavior to avoid HIV, causing infection rates to drop. [...]

Posted by Unknown at 11:56 AM
Email ThisBlogThis!Share to TwitterShare to FacebookShare to Pinterest