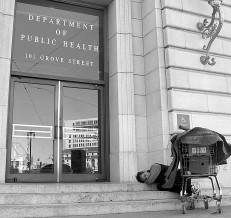 For more than a year the San Francisco DPH has lacked a head of HIV prevention, and there's apparently no qualified gay man in the city who will soon become HIV prevention chief, a job with a $145,041 salary and fringe benefits package.

In October 2005 openly gay Steven Tierney resigned from this position to take a job with the SF AIDS Foundation. He's now a public policy director at the nonprofit agency, earning $155,000, according to a story in the Bay Area Reporter last year. No one's taken his place at DPH. Maybe there are no gay health educators who want Tierney's old job.

(Longtime watchers of AIDS Inc know there's always been a revolving door between DPH and the AIDS foundation and all other HIV service organizations, and vice versa, making for one big happy family of bureaucrats who rotate in and out of DPH and AIDS Inc. There are no ethical rules stopping DPH bureaucrats who've been doling out millions of government dollars one day to an AIDS group, to quit and the next begin work at that private agency, but good government principles should include a one-year delay before DPH employees can work for private health agencies.)

It's safe to say not many gay men have noticed the absence of an HIV prevention boss at DPH, and if they have, there certainly hasn't been a loud cry for someone to fill the position. Seen any stories or letters in the gay press clamoring for new HIV boss, not just lately, but ever? Heard of any pressure being applied on the DPH to fill the slot?

Since San Francisco's gay community has managed to survive quite nicely all these months without such a boss, and the DPH is no hurry to replace Tierney, let's consider eliminating the HIV prevention chief's job at DPH and putting the money saved from cutting a rather unnecessary city job into rental subsidies for people with AIDS.

Can you think of a single reason why DPH should continue to fund an HIV prevention boss when the senior HIV health educator, openly straight Tracey Packer, has served in this capacity and has done an exemplary job? I can't.

She has been with the DPH for years and is cochair of the HIV prevention council. Ms. Packer's compensation from the city for her services is $117,070.

We also have the controversial and kooky Dr. Jeff Klausner, head of the STD control and prevention unit, who has considered quarantining PWAs and called for restricting gay men and PWA's access to Viagra, fulfilling his responsibilities to stop HIV and other sexually transmitted infections. I don't know Klausner's salary, but it's probably in the range of what the HIV prevention boss was making.

If DPH leaders are serious about hiring an HIV prevention chief, and I don't know why they should, they would do us all a favor by explaining why the position is necessary, when they plan to fill it and why it's taking so long to fill this supposedly important DPH position.

But just cutting out the position, and diverting the money saved to directly meet the housing needs of PWAs, would better serve the gay and AIDS communities.
Posted by Unknown at 11:18 AM
Email ThisBlogThis!Share to TwitterShare to FacebookShare to Pinterest