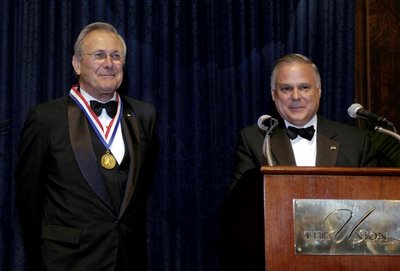 Get me one of those barf bags from an airline, and quickly too! I've just seen the photo released today by the Pentagon of outgoing DoD head Rumsfeld wearing the Gold Medal awarded to him on Friday by the Union Club in Philadelphia and I feel like throwing up.

Rumsfeld should be facing a war crimes tribunal, preferably in jailhouse orange sweats, not being honored with a red, white and blue ribbon with a dangling piece of bling and the soon-to-be ex secretary of defense in a snazzy tux.

According to the AP, several handfuls of protesters voiced their opposition to him receiving the honor and his deadly policies. Thank you very much, Philly protesters, one and all! Interesting that the Union Club lays blame for the event's shroud of secrecy at Rumsfeld's feet:

Officials at the selective private club presented its Gold Medal to Rumsfeld at a black-tie affair on Friday night, but would not discuss the reason behind the award.

"My family is traditional Republican, and they are sick about the Union League giving Rumsfeld a medal," said protester Elizabeth Doering, whose grandfather and father were longtime club members. "It's such a crass gesture."

When the league gave then-Supreme Court Justice Sandra Day O'Connor its Gold Medal in 2004, the event received full press coverage. But the league kept the Rumsfeld medal cloaked in secrecy until the Philadelphia Daily News broke the story on Thursday. [...]

When asked about the secrecy surrounding the Rumsfeld medal, league spokeswoman Patricia Tobin said, "It's up to the awardee. We always try to respect the wishes of the awardee."

Posted by Unknown at 6:09 PM
Email ThisBlogThis!Share to TwitterShare to FacebookShare to Pinterest

So, is the award given according to hwo wants to buy it? You know, like those certifications of excellence sold by the Chamber of Commerce? Where are the criteria for award written down? Who the hell is Union League anyway and why should anyone care (outside of Philly)?