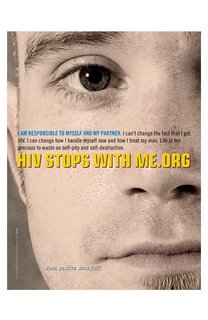 [This letter was transmitted through various means to HHS, S.F. DPH, Rep. Nancy Pelosi & Sen. Tom Coburn. Such an audit is _long_ overdue.]

It has come to my attention that in September 2005 you conducted a much-needed audit of HIV prevention contracts and grants managed by the Centers for Disease Control and Prevention, and your overall finding was that there are "widespread deficiencies" in how the CDC oversees HIV prevention grants.

Your audit gave the following explanation for it and made some disturbing conclusions:

"During fiscal years (FYs) 1999 through 2003, the period of our audit, the Centers for Disease Control and Prevention (CDC) used more than $2.6 billion of HIV/AIDS prevention funds to award grants for State and local health departments and community-based nonprofit organizations to carry out surveillance, testing, counseling, research, conferences, outcome evaluations, and other related activities. These grants serve as important tools in carrying out CDC's mission of preventing and controlling HIV and AIDS. [...]

"The objective of our audit was to determine whether CDC complied with applicable laws, regulations, and departmental policies in managing its HIV/AIDS prevention grants.

"During FYs 1999 through 2003, CDC management of HIV/AIDS prevention grants did not always comply with applicable laws, regulations, and departmental policies. We reviewed PGO (Procurement and Grants Office) and Center records related to 15 grants and identified widespread deficiencies throughout the preaward, award, and postaward phases of CDC's grants management operations."

In the context of those deficiencies, I write to you today because I am very concerned about the CDC's various grants to the Better World Advertising agency of San Francisco, for the HIV Stops With Me social marketing campaign, which is underway in eight gay markets: San Francisco, New York City, Boston, Long Beach, Los Angeles, Seattle, Buffalo and across the state of Oregon.

Health officials estimate that since the campaign began in San Francisco in 2000, a little more than $3 million in CDC grants have been allocated just for this city, and the seven other regions receiving CDC money for their own local versions of HIV Stop With Me efforts have each received between $1.5 and $2 million in federal prevention funds.

It's been projected that total costs of the campaign are a minimum of $13.5 million in grants from the CDC. All of these grants in all eight regions must be subjected to your office's oversight processes.

I am requesting a full fiscal audit and an extensive performance audit of all moneys given to the Better World Advertising agency, by the CDC, for the entire HIV Stops With Me campaign, from its start date through the date of this letter. There are concerns among HIV prevention advocates that potentially inappropriate expenses from one jurisdiction of the eight regions involved, may have been charged to a different jurisdiction.

Additionally, I ask that you carefully examine every expense report and all itemized receipts from Better World Advertising submitted to the CDC, whenever the ad agency's project directors attended HIV prevention conferences throughout all of the years of the contracts, as contractually mandated in CDC's grants to the agency.

The CDC contracts with the ad agency state, in the quality assurance section: "The Project Coordinator will attend at least one HIV prevention related conference this funding cycle."

Absolutely no justification is made by CDC in the contract as to why such travel, hotel, meals, and other incidental expenses incurred attending such HIV conferences is required and helps with prevention.

Therefore, I formally request you immediately begin an audit of the Better World Advertising agency's grants from the CDC for HIV Stop With Me.

A prompt reply is requested and appreciated.