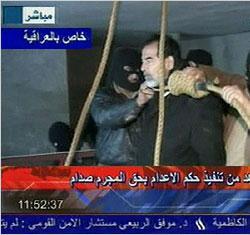 Across the pond, London's premier gay news publication Pink News today published a fascinating article about Saddam Hussein and his record on homosexuals. The article has apparently generated some criticism about the tone and content from readers, and the owner of the news service, Benjamin Cohen, responded with this statement on his site:

Since this article was posted, we have received a number of emails in relation to Saddam Hussein. I must make it clear that we were not defending this brutal dictator in any way. We were simply reporting his death as relevant to the LGBT community.

Here are several excerpts from the story:

The former Iraqi dictator Saddam Hussein has been executed but questions remain over his attitude towards homosexuality.

While it is true at during the 1990s Saddam's representatives at the United Nations opposed discussions of international gay rights or welcoming gay groups as observers to the UN, the actual position of gay people within the country remains sketchy at best.

During Iraq's period of isolation following the last Gulf War, it is believed that the regime tolerated an active gay night-life particularly within Baghdad. Although it is also claimed that Saddam and his ministers turned a blind eye to gay honour killings. It must be noted though that most observers now believe that killings of gay people have increased following the American lead invasion.

In an exclusive interview with PinkNews.co.uk earlier this year, George Galloway, the anti-war Respect MP for Bethnal Green and Bow defended Saddam's record on gay rights.

“"There are a very large number of homosexuals in the Arab world, the official rhetoric is often well short of the actual practical situation is on the ground."

He added: “We took a prominent Canadian politician, Sven Robinson [to Iraq], who made a speech which opposed sanctions, opposed the upcoming war, and then launched an attack on Iraq for a perceived witch-hunt against gays and many people said to us afterwards, if you had only have spoken to us about that you would have found out in practice that's not true at all."

Following the execution, Iraqi Prime Minister Nouri Maliki said: “Justice, in the name of the people, has carried out the death sentence against the criminal Saddam, who faced his fate like all tyrants, frightened and terrified during a hard day which he did not expect.”

In a letter published before his death, Saddam said: “To the great nation, to the people of our country, and humanity,

“Many of you have known the writer of this letter to be faithful, honest, caring for others, wise, of sound judgement, just, decisive, careful with the wealth of the people and the state ... and that his heart is big enough to embrace all without discrimination.

“You have known your brother and leader very well and he never bowed to the despots and, in accordance with the wishes of those who loved him, remained a sword and a banner. [...]

He added: “I call on you not to hate because hate does not leave a space for a person to be fair and it makes you blind and closes all doors of thinking and keeps away one from balanced thinking and making the right choice.

“I also call on you not to hate the peoples of the other countries that attacked us and differentiate between the decision-makers and people ...Anyone who repents - whether in Iraq or abroad - you must forgive him [...]

Click here to read the full story.
Posted by Unknown at 2:30 PM
Email ThisBlogThis!Share to TwitterShare to FacebookShare to Pinterest