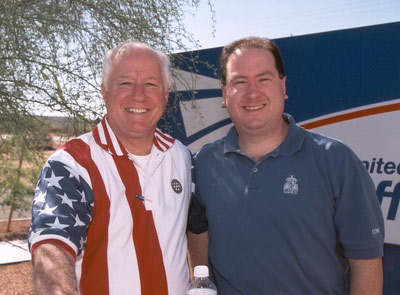 Retiring gay GOP Arizona Rep. Jim Kolbe, after he was outed, did some favors on behalf of gays and lesbians, though nothing notable readily springs to mind, but, in my opinion, there's no reason we should place Kolbe in the pantheon of gay political leaders, of any party affiliation, who deserve special credit for advancing full equality for the gay community in all arenas of modern life.

When all is said and done and history evaluates Kolbe's achievements as a gay Republican Congressman, it may be said that he greatest achievement was his symbolic role as the only such person in Congress.

With his career coming to an end, Kolbe granted an interview to the Arizona Daily Star and he expressed remorse over his vote to go to war in Iraq, but absolutely no regrets over his vote in favor of the hideous Defense of Marriage Act, an act that relegates him and all gays to second class citizenship status.

On the invasion of Iraq:

Kolbe said if he'd known then what he knows now about Iraq, he wouldn't have voted to authorize going to war in 2002. But he said he still believes the best information available at that time made a good case for the invasion then.

Regarding marriage equality for gays and lesbians and his DOMA vote:

However, Kolbe said he didn't regret his 1996 vote in favor of the Defense of Marriage Act, which allows states to refuse recognition of gay marriages approved in other states. His vote on that bill prompted a gay-oriented magazine to prepare an article outing him as a homosexual, which led Kolbe to publicly declare that he is gay.

"I could make a very good argument that marriage belongs in the hands of the state," he said. "I don't think that should be changed."

So Kolbe regrets his vote on Iraq, but in his homosexual heart, he can't find room to say he's the least bit sorry for his shameful in the enactment of DOMA. Well, allow me to return the sentiment and say, as a key architect of the 1996 campaign to out him, I in no way regret working to force open Kolbe's closet door.

From the 1996 article by J. Jennings Moss in the Advocate referred to by the Arizona Daily Star:

But while Kolbe and Foley told The Advocate that a member of Congress's sexual orientation should not be an issue, activists were saying otherwise. Michael Petrelis—who gained notoriety for throwing a drink on Gunderson at a gay bar in 1991 and then publicizing the incident in an attempt to force the congressman to come out—used his computer to raise questions about several lawmakers he said were in the closet. Petrelis sent his own reports or forwarded others to a mailing list that included more than 100 activists, writers, and publications.

Goodbye, Jim Kolbe. As you leave the House of Representatives, don't let the heavy doors smack you too hard in the butt. And may the next gay Congressman from the Republican Party do a better job of articulating the need for America to embrace equality for gays, and the votes championing a gay agenda and doing no harm to the vast gay community. That isn't asking too much, now, is it?
Posted by Unknown at 12:59 PM
Email ThisBlogThis!Share to TwitterShare to FacebookShare to Pinterest

I'm glad he got outed. And I hope he can't get laid for many, many years for his suppression of rights.

I received this comment from my friend Karl, and in the interests of fairness, I am posting it here. -michael

Kolbe did one good thing for the GLBTQ community. He
led the fight to sustain President Clinton's Executive
Order 13087 which added sexual orientation to the
Federal Government's internal non-discrimination
policy.

The House of Representatives defeated an attempt to
repeal it.

You may not think that this is significant, and that's
entirely up to you, but it is certainly something and
not "nothing."