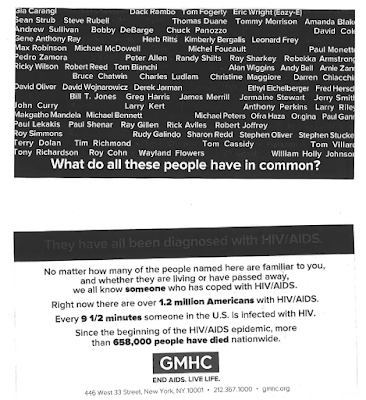 Why is an HIV and gay nonprofit services organization exploiting the name of a dead notorious conservative closeted homosexual and person with AIDS who sent people to the electric chair, ruined the lives of leftist enemies and mentored Donald Trump?

Roy Cohn is listed as a person who was diagnosed with AIDS, which he never admitted while alive, on a fundraising appeal from the Gay Men's Health Crisis of New York City.

Troubling as it is to see Cohn's name on the GMHC materials, I have to question if the agency got anyone's permission to use their name and HIV status.

It's creepy that anyone receiving this pitch for money would write a check to GMHC based on the inclusion of Cohn's name.

Posted by Unknown at 1:03 PM
Email ThisBlogThis!Share to TwitterShare to FacebookShare to Pinterest